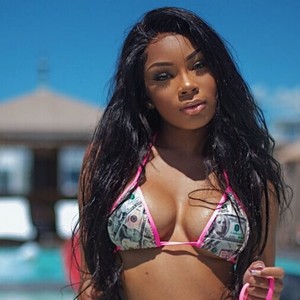 Aaliyah Jay has changed the game for all the beauty gurus out there. She has set a new limit of perfections. Her perfectly blended makeup and eye-catching glam looks have attracted millions of people all around the world. She has nearly two millions fans on both of her Instagram and YouTube. Isn’t that amazing?

Aaliyah Jay is an American YouTuber who has earned a lot of fame for his makeup tutorial and tricks, beauty tips, product reviews and travel vlogs which she uploads in her channel, MsAaliyahJay. Right now, she has earned more than 1.2 million subscribers. Not just that, her channel has garnered a total of more than 84 million views from her videos. Other than YouTube, she has lots of fan followings on her various social media platforms. Also, she has more than 1.7 million followers on her Instagram alone at the time of writing this article.

Aaliyah had an abortion? Know about her Butt implants

As per her relationship history, she has dated a lot of guys that too very renowned artists. It is stated that she had an abortion of her baby in 2015. She was too focused on her career at that time so she had no plans for marriage and children. That is why she took this decision and it has been confirmed by Jay herself.

Did Jay do butt implant? Well, most of the celebrities that do not want to admit that they had plastic surgery. They feel insecure about their imperfection so prefer to keep it a secret. Likewise, Aaliyah Jay has not accepted the fact that she did surgery for her buttocks. She claimed that it was just her weight gain, and butt implants are the rumor created by her haters which is obviously fake.

So is the case for Aaliyah Jay, as most of her earnings and incomes come from YouTube. The subscribers and viewers count of her has risen significantly over the years.

Currently, she has more than 1.2 million subscribers on her channel with an average of 61,941 views daily.

Net Worth: According to socialblade.com, from her YouTube channel, she earns an estimated $5.6K – $89.2K in a year calculating the daily views and growth of subscribers.

It would be unbelievable if one would say Aaliyah Jay does not have a boyfriend. Oh come on, just because she doesn’t post anything about her relationship openly doesn’t mean that she is single.

Hot and sizzling Aaliyah Jay has been dating a guy for more than a year now. It’s just that she doesn’t want her relationship to be public on the internet. She sometimes posts about her boyfriend but doesn’t reveal his identity.

She had dated many popular figures lately such as  NBA player- Archie Goodwin, hip hop artist- PNB Rock. After a lot of breakups and heartbreak, she has finally been loyal to a man but hiding his identity from the public’s eye.

Aaliyah Jay started her YouTube channel on November 15, 2011, and uploaded her first video titled “Daily Make Up Routine.” Since then she has been uploading various makeup tutorial and tricks, beauty tips, product reviews, and travel vlogs.

Till now, out of all her videos, “STORY TIME: I met the side-chick!” is the most popular videos on her channel. It has racked more than 3.1 million views as of now.

At the moment, her channel is growing day-by-day with over 1.2 million following her video content. Also, she is consistent in uploading videos as she uploads videos 3-4 times a week.

Few rumors about celebrities regarding their relationship and career spread here and there. It was rumored that Jay may be dating a basketball player named Shamorie Ponds. However, it turned out to be true. However, it couldn’t turn into a serious relationship.