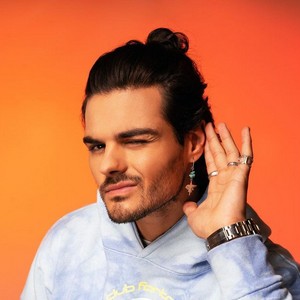 Abraham Mateo is a Spanish singer, a songwriter who is widely known for his soulful singing and music. Abraham has been singing since the very early age of 3, he was born with this pure talent and as of now, he has won the heart of millions of people through his music.

Here we have assembled some information and facts about him like his career, family, education, age, and many more. So make sure to stick with us till the end.

Abraham Mateo was born on 25 August 1998, in Spain. Abraham is of Spanish descent. Abraham’s parents are Antonio and Susana Chamorro.

His father Antonio used to work as a construction worker and security guard. He was born in a family with musical roots. His maternal grandfather was a tenor soloist and his paternal grandfather was a flamenco singer. his mother also used to sing Boleros and Spanish music and also was his first teacher. He also has an older brother named Tony who also sings. Ever since Abraham was a kid, he was passionate about singing. He had a childhood in a very caring and loving environment. His parents were really supportive and attentive about his needs. In simple words, he got a childhood that surely made him the talented and successful person he is right now.

Since Abraham has earned such huge fame and popularity as a singer, Many should have been very inquisitive to know about Abraham’s relationship status as well. So, without any further waste of time let’s dig into it.

Abraham had already started winning prizes and awards for his singing at the mere age of seven. At the age of nine, he was awarded the Revelation Prize at Spain’s national music contest for kids. Abraham also starred as a regular on the children’s TV show Menuda Noche. Around the age of ten,  he signed a recording contract with EMI Music Spain and released a self-titled debut album.

After four years of the release of his first album, he returned with his second album titled “AM” on Sony Music Spain. He made his breakthrough in the music scene with his single “Senorita” achieving great success in Spain and Latin America. “Senorita” stayed in Spain’s Top 50 single charts for almost a year and its music video was the most trending music video of 2013 in YouTube Spain. Abraham released his third studio album “Who I Am” in 2014. The album peaked at number one in Mexico and Spain. After a year later, he released his fourth album “Are You Ready” which showcased his own songwriting skills and more mature style as well. His albums have received one Platinum and three Gold certification in Spain. His fifth album “Loco Enamorado” entered Billboard charts, Spotify’s Global Top 50, and has been multi-Platinum certified in the US, Spain, and Latin America. Abraham has also performed on the European Spanish soundtrack of several animated movies and series including Frozen and Minions.

Abraham has received four nominations for the Premios Juventud awards. He was named in the “21 Under 21s Next Class” list of “music’s hottest young stars” by Billboard and also placed on their Top 10 young Latic acts list. Abraham is the youngest solo male artist to lead Billboard’s Latin Airplay chart.

Abraham Mateo stands at the height of 5 feet and 10  inches. However, the information regarding her weight remains unknown. Abraham looks very attractive with beautiful Dark Brown eyes and Dark Brown hair. Also, he has an Athletic body physique. The details regarding his body measurements remain unknown.

Singer: As of now, Abraham has not shared any information regarding his income or earnings. However, according to www.recruiter.com the average income of a singer is estimated to range from $45,000 to $65,000.

Sponsorship: As he has more than 2.8 million followers on his Instagram account, advertisers pay a certain amount for the post they make. Considering his latest 15 posts, the average engagement rate of followers on each of his posts is 2.15%. Thus, the average estimate of the amount he charges for sponsorship is between $5,579.25 – $9,298.75.

YouTube: Currently, Abraham has more than 4.33 million subscribers on her channel with more than 869,403 views until now.

According to socialblade.com, from his YouTube channel, Abraham earns an estimated $78.2K  –  $1.3M in a year.

Q: What is Abraham Mateo’s birthdate?

Q: What is Abraham Mateo’s age?

Q: What is Abraham Mateo’s height?

Q: Who is Abraham Mateo’s Girlfriend?

A: Abraham Mateo is Single at the moment.

Q: What is Abraham Mateo’s Net Worth?