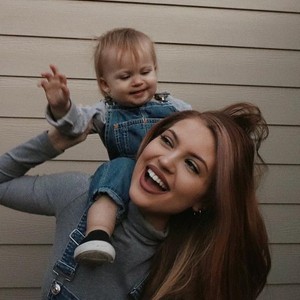 When it comes to the most beautiful feeling in the world for women, the majority says its “Motherhood”. But what if its too soon? Will it be difficult? Well, people like Allie Brooke who got pregnant at the age of 17 share that there is nothing like “too soon” when you are blessed with a baby of your own. Despite the struggles and emotional breakdowns for not having the support from her boyfriend during pregnancy, she has learned the lesson of patience, pure joy and faith and expects nothing in return but love. She spreads the positivity and joy of motherhood through her youtube channel to other young Allies. Now let us know more about this young mother, Allie.

Allie Brooke is a 21 year old YouTuber, who was born on May 11, 1999. in the United States. Ever since Allie was a kid, she was always interested and passionate about traveling and fashion. As Allie grew up, she accumulated a lot of fame and recognition for her vlogs as a teen mother which she uploads in her channel, Allie Brooke.

Right now, Allie has earned more than 1.02 million subscribers. Not just that, her channel has attained a total of more than 65 million views from her videos. Other than YouTube, she has lots of fan followings on her various social media platforms. Also, she has more than 179k  followers on her Instagram alone at the time of writing this article.

Who is Allie Brooke’s baby’s father? How did she get pregnant? Is she in a relationship right now?

Allie Brooke had to experience several sides of the relationship at a very young age. At the age of 17, she got pregnant with her boyfriend at that time. So probably she has faced blooming love, rejection in pregnancy from her family, maturity, and lessons from the struggles and many more.  She has shared the video with her boyfriend back in 2018.


In March 2019, she introduced the new man of her life in one of her youtube videos. His name is Taz Frase, who worked as a waiter. Currently, both of them are working together on Allie’s Youtube channel. Taz has been really supportive of her youtube channel and helps her make awesome videos. They use to be friends and eventually turned out to be business partners. Allie has mentioned that Taz loves her daughter, Cartia as his own, and Cartia does the same but she clearly mentioned that he is just a business partner. Maybe she is not willing to share more information or maybe that’s the truth, nobody knows!

Currently, she describes herself as a single mother s probably she is not dating anyone as of now.

What is Allie Brooke’s NET WORTH and EARNINGS??

Considering Allie’s latest 15 posts, the average engagement rate of followers on each of her post is 23.38%. Thus, the average estimate of the amount she charges for sponsorship is between $544.5 – $907.5.

So is the case for Allie Brooke, as most of her earnings and incomes come from YouTube. The subscribers and viewers count of her has risen significantly over the years.

Currently, she has more than 1.02 million subscribers on her channel with an average of 80,937 views daily.

Net Worth: According to socialblade.com, from her YouTube channel, Allie earns an estimated $80k – $112k in a year calculating the daily views and growth of subscribers.

Thus, evaluating all her income streams, explained above, over the years, and calculating it, Allie Brooke’s net worth is estimated to be around $500,000-$600,000.

Mother:    Her mother appears in her YouTube video time and again. However, they only talk about her pregnancy and her mother’s reaction regarding her pregnancy. There is not much detail about her mother personally.

Childhood:    She is very open about her life as a teenage mom but she has kept her childhood information as secrets. She has not revealed anything about her past life except things related to her pregnancy.

Education:    She has shared her video with her baby in the school but she has not revealed the name, or academic degree she is attaining or has attained.

Allie Brooke started her YouTube channel on Feb 28, 2010, and uploaded her first video titled “TEEN MOM: A REAL DAY IN THE LIFE.” Since then she has been uploading various vlogs as a teen mother.

At the moment, her channel is growing day-by-day with over 1.02 million following her video content. Also, she is consistent in uploading videos as she uploads videos 3-4 weeks a week.

Being at such a young age, she has successfully been able to maintain her limelight out of sight of rumors and controversies. She has not indulged herself towards any hoax which proves that she is one of a kind who loves giving separate space to personal and professional life.

Is Allie Brooke involved in any RUMORS AND CONTROVERSY?

Q: What is Allie Brooke’s birthdate?

Q: What is Allie Brooke’s age?

Q: What is Allie Brooke’s height?

A: Allie Brooke’s height is 5 feet and 4 inches.

Q: Who is Allie Brooke’s Boyfriend?

A: Allie Brooke is Single at the moment.

Q: What is Allie Brooke’s Net Worth?