Arat Hosseini, better known as Arat.gym, is supposed to be playing with toys as per her age. Instead, he started an intense physical regime since he was just two years old. Matter of fact, he already has achieved a physical prowess which is untrue for boys of his age. He already has 6 pack-abs which makes him an absolute miniature beast. Also, he possesses an insane and tremendous potential in football as many of his videos where he dribbles past players has gone viral. His dream is to be a legendary player like Lionel Messi. He shows true passion and stays very dedicated to his goals. Now keep reading to know about this internet sensation.

Arat Hosseini was born on September 30, 2013 in Iran. As a kid, he is extremely passionate and interested in football, gymnastics, and fitness. Arat became an Instagram star who earned a lot of fame and attention for gymnastics flips as well as clips of him playing football where he beats player who is older and taller than him which he uploads on his Instagram account, @arat.gym.  At the time of writing this article, Arat has already amassed more than 2 million on Instagram alone.

What made Arat Hosseini famous?

His father and Arat started training just when he was just nine months old. By the age of two, he already was able to perform backflips and climb walls with ease. His father was casually taking the video of Arat performing the flips. He uploaded it on Facebook and within a few days, he became a viral star where his video was shared worldwide. After that, his father started his own social media accounts.

Later, Arat showed interest in football and incredibly he was gifted at it as well. Once again, he became viral because of his football skills where he just dribbles past players twice his size and age with ease.

Father:      The place where Arat is at the moment is only because of his father. His proper guidance and training method to keep him motivated shows how strong of a bond they share with each other. He has trained him to be an athlete, hard worker and most of all, be humble. See the clip below to know about their bond.

Mother:    He has featured his mother on his Instagram where she takes care of every nutrition he needs to achieve his dream.

Sibling:    He has an older sister sibling named Aida.

Education:    Given his age, he is still pursuing his earlier education. 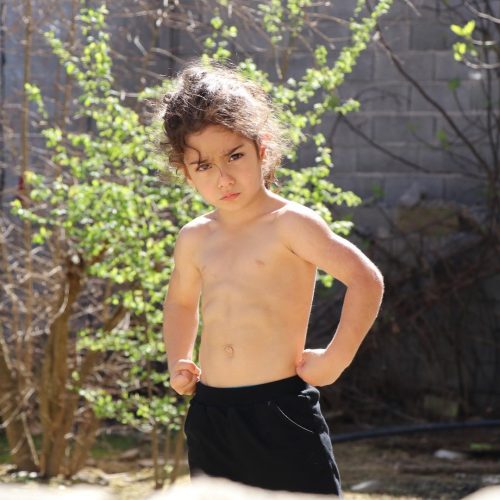 Since he is just a kid, he is entirely dependent on his father. But, given his worldwide popularity and followers on various social media, it is obvious that many brands have already signed. However, it is not relevant to how much he is earning and his net worth is.