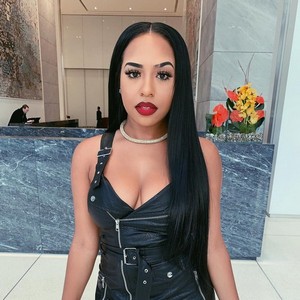 Facts about B. Simone

B.Simone is an American R&B singer, Actress, and Comedian, who gained a lot of popularity and fame for her appearance on the popular show named Wild ‘N Out on MTV. Also, she has done various singing and comedy tours all over the US. Due to her hilarious, talent and charming personality, she has garnered a lot of followers and admirers all over the world. This statement is supported by the fact that she has more than 1.9 million followers as of November 2018.


Not only that, she is a makeup artist as well, with a YouTube channel related to beauty, makeup and vlogs. Her YouTube channel has more than 100k subscribers despite being a little inconsistent on uploading videos.

B. Simone’s CAREER AND AWARDS

Simone As we all know, she is an extremely talented individual with a wide range of career line. At the beginning of her career, she started out as a comedian and hosted the show named 106 & Park. After that, she became the DC Young Fly’s leading lady for the film named “*digitallivesmatter.”


As a singer, she released the EP, “Stack Now Cry Later.”She just kept expanding her horizon with hard work, passion, and sincerity. In August 2018, she started her own comedy tour “You’re my boooyfriend” with her fellow comedians.

B. Simone’s NET WORTH AND SALARY

In her Instagram posts, she is getting sponsorship deals from various brands and products. She has her own online merchandise which she sells via cupcakemafiaatl.com. Also, she has been conducting her own comedy tour all over the US. As a result, she is making lots of money and fortune from various sources which adds to her overall net worth. Thus, her estimated net worth is anywhere between $500k-$600k.

B. Simone’s BOYFRIEND, CHILDREN, AND RELATIONSHIP

B. Simone’s FAMILY, EDUCATION AND CHILDHOOD

Sibling:    She has a sister, Jordyn.