Brett Gray is a 25 years old Actor and Musician, who was born on August 7, 1996, in Philadelphia, Pennsylvania, US. Ever since Brett was a kid, he was passionate and interested in acting and music. Brett Gray got a lot of fame and recognition for his role in the popular Netflix series named On my Block as Jamal Turner.

​​The series was able to win Teen Choice Award for Breakout Show of 2018. It was also listed in the top 10 of Google’s 2018 trending TV shows. which he uploads on his Instagram account.  At the time of writing this article, Brett has already amassed more than 1.4 million on Instagram alone. 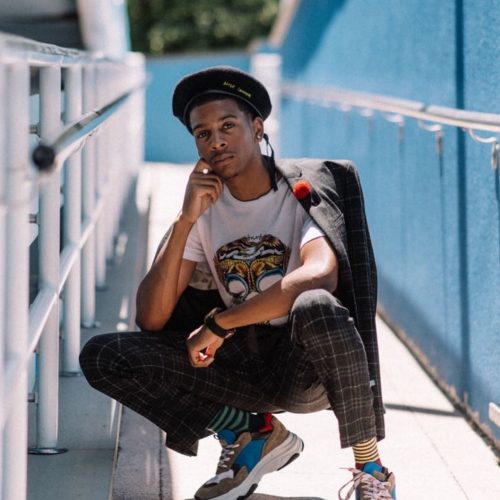 In 2006, Brett appeared in his first professional show named ‘Little Eyolf’, at the University of the Arts. After that he was cast in the role of Scipio in the controversial opera named ‘Porgy and Bess’ at the Academy of Music.

Brett later enrolled in The Philadelphia High School for Creative and Performing Arts in 2010. At the same time, he also took a part-time job working at McDonald’s. After completing his high school graduation, he landed a lead role in ‘The Radio City Music Spectacular’ in New York City.

Likewise, he made his first off-broadway play named ‘Esai’s Table’ in 2017. At the same time, he landed a lead role in the premiere of Andrew Lippa’s new musical named ‘Man In The Ceiling.’

​After that, he played a minor role in ‘The Tale of 4’. Then, he was cast in NBC’s coming-of-age drama named ’Rise.’ By this time, he had an amazing experience in the field of acting so he was offered his dream role on Netflix series called ‘On My Block’.

​Besides acting, he is also a talented musician. As he hailed from the world of musical shows and theatres, it was quite obvious for him to have interest in music. So, her mother enrolled him in the New Freedom Theater Program in Philadelphia when he was just 8 years old.

Brett started his music career with the release of his single named ‘Old Thing Back’ in May 2018.  Three months later, he released his first EP named ‘Easy Daze.’

Sibling:    He has an older brother named Brandon.

Education:    He completed his high school education from The Philadelphia High School for Creative and Performing Arts. After that, he has decided to continue his education but, rather focus on his acting career.

Is Brett Gray Gay? or Does he have a GIRLFRIEND?

As one of the most popular up and coming TV actors, it is obvious that people would want to know about the romantic life of this talented guy. To answer your curiosity, he appears to be single at the moment.

On Valentine’s day of 2018, he wished everyone Happy Valentine’s day and also mentioned how much he needs to have a girlfriend. In April 2019, he dropped a hint that he is still struggling to have a romantic life.

It led to fans doubting that he may be gay. It was even more fueled after it was known that he was an LGBTQIA specialist at Colorado College. But, he has not said anything regarding it so, we cannot say for sure if he is gay or not.

What is Brett Gray’s NET WORTH and EARNINGS?

Acting Projects: As an actor, his main source of income come from his acting projects. At the moment, his bank account is getting heavy each day after ‘On my Block’ took off.

Net worth: Thus, evaluating all his income streams, explained above, over the years, and calculating it, Brett Gray’s net worth is estimated to be around $500,000 – $600,000.

Q: What is Brett Gray’s birthdate?

Q: What is Brett Gray’s age?

Q: What is Brett Gray’s height?

Q: Who is Brett Gray’s Girlfriend?

A: Brett Gray is Single at the moment.

Q: What is Brett Gray’s Net Worth?