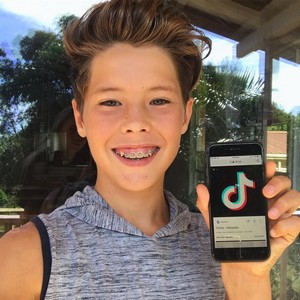 Being a son or daughter of famous individuals draws instant attention and fame. The same is the case for Caleb Coffee. He is the son of the famous internet sensation, Jason Coffee. So, it is pretty obvious that he would gain some bit of fame from his famous father.

TikTok has taken the world by storm, and Caleb Coffee has taken the TikTok world by storm. Caleb is one of the viral and rising stars where his fame has skyrocketed to 8.6 million. Don’t mistake Caleb as just another TikTok star, Caleb has been popping videos showcasing his creativity, humor, and personality. No wonder Caleb is producing viral videos one after another.

In this article, we have gathered all the information there is to know about Caleb Coffee. We have covered Caleb Coffee’s birthdate, family, education, romantic life, and net worth. So, stick to the end.

What is Caleb Coffee known for?

Caleb Coffee is a 16 years old American Social Media Star. Caleb rose into fame and limelight for his dance videos, lip-syncs to trending songs and voice-over, short funny videos which he uploads on his TikTok account, calebcoffee. Caleb gained his first fame after he started appearing in his father’s Vines. He then created his own Vine account and gained over 200,000 followers on it before the app got shut down.

Moreover, Caleb started out on TikTok just for fun and as a part of a trend, but, little did Caleb know,  that he would have more than 8.6 million people following Caleb on TikTok alone. Not just that, Caleb has extended his social reach on Instagram with more than 1.3 million followers as of now.

Caleb Coffee was born on March 28, 2005, in California, United States. Caleb is of Caucasian ethnicity.

Caleb’s family is packed with social media stars. His father Jason is a famous TikTok star. He worked in the Star Bucks before he was famous. After Vine was launched, he began uploading funny content from the start. With time, his videos got attention as many of them went viral. At the time the Vine was shut down, he already had more than 900k followers on his Vine Account. After that, he switched to TikTok. It wasn’t difficult for him to gain followers on his account as he was already popular. At the moment, he has more than 2.9 million followers on his account. His mother’s name is Chassy.

He has got a brother and sister named Isaac, and Peyton who are also famous social media stars. Peyton has got a massive fan following on TikTok with over 13.9 million followers. Isaac is a dancer and a social media star as well. His mother Chassy has earned over 20,000 followers on Instagram.

Ever since Caleb was a kid, he was passionate about fashion and modeling. Caleb Coffee’s childhood was really great amidst a lot of care and love from her parents. They were continuously meeting everything Caleb requires to pursue what she wants. In simple terms, Caleb had undergone a childhood that has unquestionably played a pivotal role to achieve the progress Caleb is getting momentarily.

There is no information about Caleb’s education and qualifications until now. Nevertheless, given Caleb’s accomplishments, he appears to be well-educated.

However, he has kept his romantic life a secret from his fans and followers. He has not revealed his relationship status until now. We searched through his social media accounts and searched through the internet, but we could not find any information about his relationship status. It is only a matter of time until he reveals any information about it.

Caleb Coffee stands at a height of 5 feet 9 inches (1.75 m). However, the information about Caleb Coffee’s weight remains unknown. Caleb looks very attractive with beautiful Dark Brown eyes and Dark Brown hair. Also, he has an athletic body physique. However, the detailed statistics showing Caleb’s body measurements are not known.

What is Caleb Coffee’s NET WORTH and EARNINGS?

TikTok Sponsorship: As Caleb has more than 8.6 million followers on his TikTok account, advertisers pay a certain amount for the post they make.

Considering Caleb’s latest 15 posts, the average engagement rate of followers on each of his posts is 17.28%. Thus, the average estimate of the amount he earns from sponsorship is between $3.85k – $5.78k.

Instagram Sponsorship: As Caleb also has 1.3 million on his Instagram account, he would also make decent money from sponsorships. Considering Caleb’s latest 15 posts from Instagram, the average estimate of the amount he earns from sponsorship is between $2,769.75 – $4,616.25.

Net worth: Thus, evaluating all his income streams, explained above, over the years, and calculating it, Caleb Coffee’s net worth is estimated to be around $500,000 – $600,000.

It is apparent that several bad information about figures like Caleb Coffee involving them spread here and there. Caleb haters can make stories and attempt to take her down due to jealousy and envy. Yet, Caleb has nevermore given much thought to it. Preferably Caleb concentrates on positivity and love, Caleb’s fans and followers give. Caleb has done excellent work to keep herself distant from controversies until this day.

Q: What is Caleb Coffee’s birthdate?

Q: What is Caleb Coffee’s age?

Q: What is Caleb Coffee’s height?

Q: Who is Caleb Coffee’s Girlfriend?

A: Caleb Coffee is Single at the moment.

Q: What is Caleb Coffee’s Net Worth?