Let’s be honest, teenage pregnancy is not quite accepted in society. Teen who gets pregnant mostly resort to abortion. But, that doesn’t go for Camryn Turner. She became a mother when she was just 16 years old. Matter of fact, she is a proud young mother who likes to share her motherhood and pregnancy experience via her YouTube channel. Not to mention, her strong personality is evident by her attitude of not caring what people will say about her. 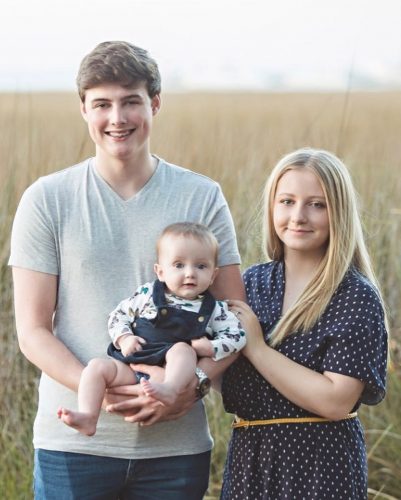 Camryn Turner was born on February 20, 2001, in the United States. She is best-known for uploading vlogs, Q n A, reaction videos, and videos related to her child and motherhood experiences in her channel, Cam&Fam. Right now, she has earned more than 1.28 million subscribers. Not just that, her channel has garnered a total of more than 128 million views from her videos.

Other than YouTube, she has lots of fan followings on her popular social media platforms. Also, she has more than 444k  followers on her Instagram alone at the time of writing this article.

Landon is no more, devastating

At just the age of 19, Landon Clifford passed away after being in a coma as a result of a brain injury on August 13. On Camryn’s post, she said that he suffered a fatal injury while he was saving the lives of others. He was a compassionate, loving, thoughtful, kind, and gentle. Even after passing away, he has donated several organs giving life to many others.

August 13th 2020 was Landon’s last day being the best dad and husband he could be. After spending the following 6 days in a coma he passed on and donated several organs to people in need all over the country. He died saving the lives of others. That’s the type of person he was. Compassionate, loving, thoughtful, kind, and gentle. He was an amazing husband and the best father those girls could of ever asked for. It saddens me deeply that they will never get to truly know him. He was so young and had so much more life to live. This isn’t how things were supposed to go. He was meant to make it to his next birthday. He was meant to walk his daughters down the isle. He was meant to die old with me. Words can not come close to describe the pain I feel. All I can do now is make sure our girls know how much he loved us. He’s looking down on us from heaven and his light will shine through the clouds when we look up at him. May he rest peacefully.

How Camryn Turner got pregnant? Who is her baby’s father?

As she got pregnant at the age of 16 so, it is obvious that people would want to know about her romantic relationship. It all started when she was 14 years old. She had moved to a new school where Landon was studying. As she was outgoing and friendly, it was not long that they became friends.


Not just that, she also moved into a new place where Landon was living. That officially made them neighbors and it became a reason for them to hang out together.

At the final days of school, they began liking each other but, were not in a relationship. After school finished, she went to a camp for 2 weeks. That was the time, she felt a special connection with him. After she returned, Landon asked her to be in a relationship and she happily accepted.

As they were kids, they really had a difficult time together. But, they were very forgiving of each other and after she gave birth to a beautiful girl, they really began to mature. Also, they have already engaged in 2018.

Sibling:    She has four siblings.

Childhood:    She had the best childhood one could ever have because her parents were really supportive of her needs and interest. Amazing thing is that they are even supporting her early pregnancy respecting her decision to give birth.

Education:    Due to her pregnancy it is obvious that her school has been disrupted. She has already dropped out of school to pursue her YouTube career.

So is the case for Camryn Turner, as most of her earnings and incomes come from YouTube. The subscribers and viewers count of her has risen significantly over the years.

Currently, she has more than 1.38 million subscribers on her channel with an average of 173,384 views daily.

Net Worth: According to socialblade.com, from her YouTube channel, she earns an estimated $13.7k – $219.3k in a year calculating the daily views and growth of subscribers.

However, the information presented above is not enough to estimate her net worth. It is because she began actively posting only since early 2018. So, she is at the very beginning of her bright YouTube career. There is no doubt that her net worth is growing day by day as she is getting a lot of popularity. Regardless, it is safe to say that Camryn net worth has crossed $50k.

Camryn Turner started her YouTube channel on November 21, 2010, and uploaded her first video titled “Gender Reveal | Teen Mom Vlog.” Since then she has been uploading various vlogs, Q n A, reaction videos and videos related to her child and motherhood experiences.

Till now, out of all her videos, “Teen Parents: Night Routine” is the most popular videos in her channel. It has racked more than 3.1 million views as of now.

At the moment, her channel is growing day-by-day with over 625k following her video content. Also, she is consistent in uploading videos as she uploads videos three to four a week.

Read more about a beautiful teen mom like her – Yasmyn Switzer