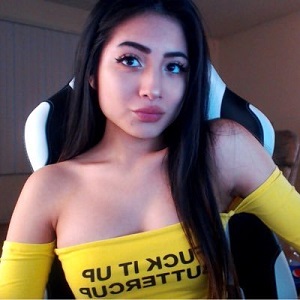 Daisy Michelle is an American YouTuber, Twitch streamer who is best-known for uploading gameplay videos of popular games such as Fortnite, COD and Overwatch in her channel, DaisyyMichelle. At the moment, she has earned more than 535k subscribers as of June 2018. Also, her channel has garnered a total of more than 36 million views as well.

Besides YouTube, she has lots of fan followings on her other social media platforms. Also, she has more than 53k followers on her Instagram alone as of August 2018.  Moreover, she also streams her gameplay videos via Twitch with over 37k followers on her twitch channel.

Present status:    Daisy and Chris have been in a relationship for more than 3 years and are engaged at the time of writing. They also share a common interest as they are both gamers and often play their favorite game together. On her YouTube channel, she did QnA with her boyfriend answering a lot of the questions relating to them and their relationship. This young couple is deeply in love with each other staying faithful and committed to each other in these days when young people take relationships so lightly.

At the moment, her major source of incomes is from YouTube and Twitch. According to socialblade.com, her estimated monthly income is between $376 – $6K and estimated yearly income is $4.5K – $72.2K. Also, she has been sponsored by TechisportUSA.com, Visionmarketplace.com and many more. With the information we have, the rough estimate of her net worth is between $50k – $100k.

Sibling:    In the same way, she also has not mentioned about her siblings either.

Childhood:    Despite being actively involved on social media, she has remained secretive when it comes to her family and her childhood. She has not given any insight into her childhood until now. It seems that she is very focused on her career.

Daisy Michelle started her YouTube channel on August 24, 2011, and uploaded her first video on January 12, 2014, titled “Rage and Death Reactions.” Since then she has been uploading various gameplay videos of popular games such as Fortnite, COD, and Overwatch

Till now, out of all her videos, “ADORABLE 8-year-old kid GIVES me HIS SCAR & Teaches Me How To Play!!” is the most popular videos in her channel. It has racked more than 3.1 million views as of now.

At the moment, her channel is growing day-by-day with over 535k following her video content. Also, she is consistent in uploading videos as she uploads videos once or twice a week.