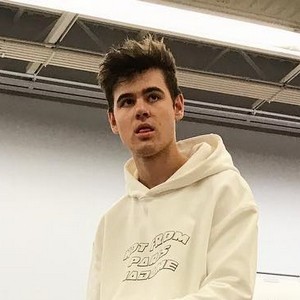 David Vlas is an American teenager who is living a luxurious life due to his YouTube fame and of course, the money. Many of his videos are extremely popular due to insane challenges, experiments and pranks he does. For example, one of his videos title is ‘WILL A GLOWING 1000 Degree KNIFE CHARGE AN IPHONE?! (INSANE PHONE LIFE HACKS)’, which shows his insane and dangerous content type. Not only that, he can play games such as Fortnite and Battle Royale at the highest level.

David Vlas is an American YouTuber who is best-known for uploading pranks, challenges, reaction, comedy videos and vlogs in his channel, David Vlas. At the moment, he has earned more than 2.3 million subscribers as of June 2018. Also, his channel has garnered a total of more than 366 million views as well. Besides YouTube, he has lots of fan followings on his other social media platforms. Also, he has more than 85k  followers on his Instagram alone at the time of writing this article.

Merchandise: As a popular young YouTuber, he has his own merchandise which is on demand by his fans. At the moment, he sells hoodies, T-shirt and other accessories via his own website, shopdavidvlas.com.

YouTube: YouTube has been a platform where people can work by connecting with viewers and getting paid for the ads viewers watch in the process of watching their videos. So is the case for  David Vlas, as most of his earnings and incomes comes from YouTube. The subscribers and viewers count of his has risen significantly over the years. Currently, he has more than 2.3 million subscribers on his channel with an average of 927,362 views daily.

According to socialblade.com, from his YouTube channel, he earns an estimated $83.5K – $1.3M in a year calculating the daily views and growth of subscribers. Thus, looking at the incredible amounts involved above, his net worth is blooming with his increasing popularity on YouTube. He has already bought expensive cars, which is a dream for many people. At just the age of 18, his estimated net worth already above $800k and below $1 million.

Childhood:    As we know, David Vlas is a vlogger as well, who shares his daily life with his subscribers. However, when it comes to his childhood and family, he has not said a word regarding it. Regardless, it won’t be wrong to say that his parents have provided him everything he wants, in fact, a luxurious life.

David Vlas started his YouTube channel on October 27, 2015 and uploaded his first video on July 7, 2016 titled “Clash Royale – 15,000 CARDS IN ONE CHEST AND 10 LEGENDARIES! MOST LEGENDARIES EVER WORLD RECORD!.” Since then he has been uploading various pranks, challenges, reaction, comedy videos and vlogs.

Till now, out of all his videos, “GUESS THE GUN SOUND *MONEY* CHALLENGE in Fortnite Battle Royale (IMPOSSIBLE)” is the most popular videos in his channel. It has racked more than 9.8 million views as of now.

At the moment, his channel is growing day-by-day with over 2.3 million following his video content. Also, he is consistent in uploading videos as he uploads videos five to six times a week.