Looking at what Dixie D’Amelio does, it makes us wonder, how can a person be so perfect? She is a hockey player, has a charismatic personality, and has that astounding beauty. So, is it not obvious that she could win the hearts of a lot of people? A lot of people in her case means millions of people. Not just that, thanks to the insane and astounding rise of her younger sister, Charli D’Amelio. She has amassed more than 20 million fans across her social media. So, isn’t it obvious that some of it would go to Dixie? It gave a big boost to her fan followings and has created her own fanbase as we all know how talented and interesting of a person she is. She is now a social media sensation and a celebrity at a very young age of 21. Now let us know more about this young social media sweetheart, Dixie D’Amelio.

Dixie D’Amelio was born on August 12, 2001 (21 years old) in Norwalk, Connecticut, United States. Ever since Dixie was a kid, she was passionate and interested in hockey and acting. She started taking hockey training at a young age. Dixie still plays hockey representing her college. She is also involved in track and field which tells how athletic and sports loving person she is. 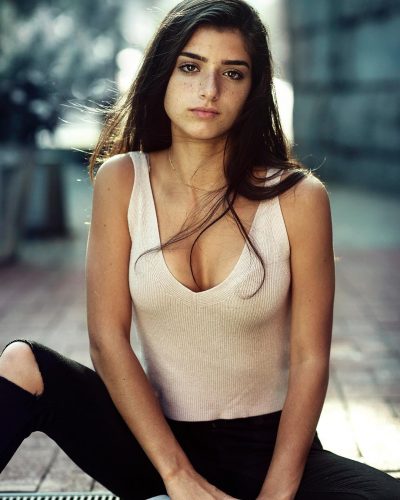 At the moment, Dixie is a TikTok star who earned a lot of fame and attention for funny montages and lip-syncs videos which she uploads on her TikTok account. At the time of writing this article, Dixie has already amassed more than 3.9 million on TikTok alone. Not just that, she also has expanded her reach on Instagram with over 1 million followers.

Father:      Her father’s name is Marc D’Amelio. She shares a very close bond with her father. He is a funny, cool, and really supportive person. His upbringing clearly reflects on how she has progressed in her life so early on.

Mother:    In a similar way, she is also very close with her mother, Heidi D’Amelio.

Sibling:    Dixie has a sister who doesn’t need any introduction as you may already know who she is.  It is none other than Charli D’Amelio. (Read more about her.)

Education:    At the moment, she is a high school student. The high school she is studying is King School which is located at 1450 Newfield Avenue, Stamford.

As one of the up and coming rising stars in the huge social media industry, it is obvious that her fans are excited and curious to know about her personal and romantic life. And, as we know, romantic relationship at her age is very common these days. So, is she single or taken at the moment?

Looking through her Instagram profile it is pretty evident that she is in a relationship with a man named Matthew. Despite all the hype and fame that Dixie is getting, he has remained to stay out of the limelight. So, there is not much to say about him other than the fact that they are dating each other.

BUT, there is a rumor mill that she has already broken up with him as per her fans who dearly follow her. However, the photos are still there on her Instagram so, we can’t say for sure if this rumor is true or not.

TikTok: As Dixie has more than 5.7 million followers on her TikTok account, advertisers pay a certain amount for the post they make.

Considering Dixie’s latest 15 posts, the average engagement rate of followers on each of her posts is 24.29%. Thus, the average estimate of the amount she charges for sponsorship is between $9,478 – $15,797. 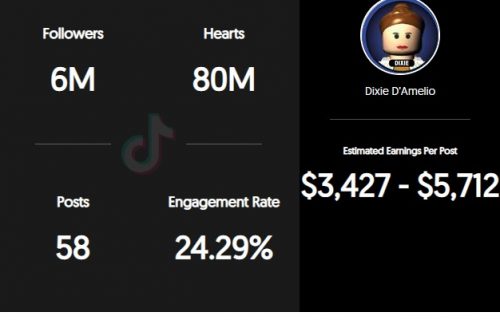 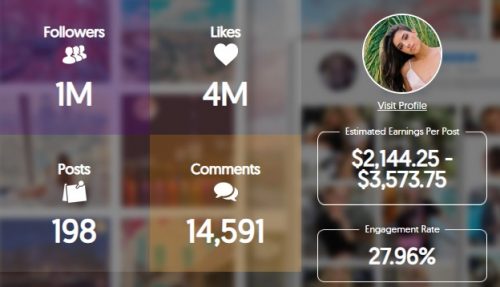 Dixie D’Amelio’s popularity and fame have been meteoric as in such a short time she has gained a significant amount of followers and fans. At such a young age, she is extremely popular and her rise is not stopping anytime soon. As mentioned above, she earns a lot from Instagram and TikTok through lots of means. Thus, Dixie D’Amelio’s net worth is over $100k as of now. It has not been long that she has stepped into this fame so, she will be earning lots and lots of money in the coming days.