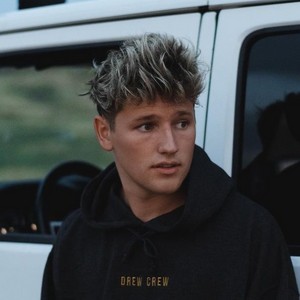 Drew Dirksen is an American vocalist, guitarist, and social media star as well. This multi-talented guy has earned world-wide fame through music and social media.
Do you want to know more about him and his musical journey? then make sure to read the article till the very end as we have covered many interesting facts and information about him.

Drew Dirksen was born on September 30, 1996, in Ohio, United States. Drew is of Caucasian descent.    He has a sister named Kacey Dirksen. Kacey is also a very popular social media star who is best known for her lifestyle, fashion, and travel-related on Instagram. Ever since Drew was a kid, he was passionate about music. He had a childhood in a very caring and loving environment. His parents were really supportive and attentive about his needs. In simple words, he got a childhood that surely made him the talented and successful person he is right now.

He attended Monroe High School. However, information about his further education is not known yet.

Drew is not only a talented guitarist but also a handsome social media star as well. He has reigned over the heart of many from the talent he inherits. As he has gained such wide recognition from people all around the globe, it is inevitable that his fans would want to know about his relationship status.

At the moment, he is in a relationship with Brittany Hertz. Brittany is popularly known as a cheerleader and also for her appearance in a short film named Woody Pax: Black & White. The couple started their romantic journey in June 2020. looking at their pictures on social media, they look very happy with each other and they are deeply in love with each other.

Drew was initially a member of the pop-punk band ‘All the Above’ alongside Nate Parker. In February 205, they, alongside vocalist Austin Corini and bass guitarist Levi Jones formed ‘The Tide’ and began uploading cover songs on YouTube. The same month, Drew and his Tide bandmates embarked on a tour. On March 25, 2016, they released their debut single titled “Young Love”. They released their second single on August 12, 2016, which was titled “Click My Fingers”. They started releasing songs one after another. Till date, The Tide band has performed across Europe, in countries including the United Kingdom Netherlands, Ireland, and Spain.


Currently, Drew and Levi Jones operates as part of the pop duo  ‘O.D.L.’ as well and has embarked on a UK Tour in March 2018.


In 2019, he joined the band RØYLS with Liam Ross and Sean Killeen and they released their debut single Savages in April.  As for now, the duo has a channel on YouTube titled ‘Drew and Levi’. The channel has got over 593k subscribers until now and is still growing.

Drew Dirksen stands at a height of 5 feet and 10  inches. However, the information regarding his weight remains unknown. Drew looks very attractive with beautiful Dark Brown eyes and Dark Brown hair. Also, he has an Athletic and Shredded body physique. The details regarding his body measurements remain unknown.

Guitarist and social media star: Drew has not disclosed the exact amount he earns until now. However, according to   www.ziprecruiter.com. an average salary of a Guitarist is estimated to be around $73,530 per year and also he earns a decent amount from social media as well.

Sponsorship: As he has more than 377k followers on his Instagram account, advertisers pay a certain amount for the post they make. Considering his latest 15 posts, the average engagement rate of followers on each of his posts is 3.95%. Thus, the average estimate of the amount he charges for sponsorship is between $1,129.5 – $1,882.5.

Merchandise: Also, Drew sells her own merchandise via teespring.com Her merchandise price range is $21 – $45 which is very affordable and gets sold out time and again.

YouTube: Currently, Drew has more than 593k subscribers on her channel with more than 58.8 million views until now.

According to socialblade.com, from his YouTube channel, Drew earns an estimated $8.5K – $135.7K in a year.

Q: What is Drew Dirksen’s birthdate?

Q: What is Drew Dirksen’s age?

Q: What is Drew Dirksen’s height?

Q: Who is Drew Dirksen’s Girlfriend?

A: Drew Dirksen is In a relationship at the moment.

Q: What is Drew Dirksen’s Net Worth?