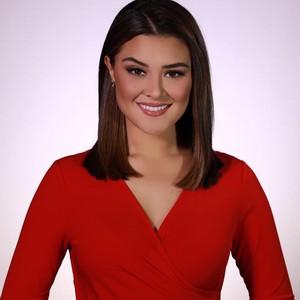 Elena LaQuatra is widely known for crowned Miss Pennsylvania USA in 2016. She has inspired thousands of people showing that having a disability cannot stop anyone to accomplish their goal. She garnered widespread popularity for her inspirational story, which involves her hearing with a cochlear implant.

In this article, we have gathered some information about Elena, her family, education, career, age, and many more. So, make sure to read it till the end.

Elena LaQuatra was born on January 27, 1992, in the United States. Elena is of Multi-racial descent.   She appears to be reserved about her parent’s history, so, she has not mentioned anything about her parents until now.  Ever since Elena was a kid, she was passionate about fashion and modeling. She has not given any insight into her childhood until now. It seems that she is very focused on her career.

She graduated from the Point Park University with her bachelor’s degree in broadcasting on camera.

As Elena has earned such huge fame and popularity, it is obvious that many people might want to know about her relationship status as well.

Talking about her relationship status, she is engaged to a guy named Jordan at the moment. However, we could not find much information about Jordan. The couple got engaged in 2019. Elena revealed that Jordan proposed to her on a random September night after returning from their annual trip to Europe. They are frequently seen together on social media and looking at their pictures, the couple looks very adorable together and is living a very happy life as of now.

At the age of 4, she was deafened in both ears due to bacterial meningitis. While she was still young, her parents made a decision to move ahead with the cochlear implants to help her regain her sense of hearing. Her hearing problem as of now has been solved after receiving a Cochlear Implant and spending years rehabilitating her listening and spoken language skills. She completed her first pageant at the age of Miss Pennsylvania’s Outstanding Teen. In 2007, she went to Miss America’s Outstanding Teen. She also competed in the Miss Universe Organization where she won the title of Miss Pennsylvania Teen USA. She later took a break from pageants to focus on her college career and to pursue a degree in broadcasting. But she then decided to compete for Miss Pennsylvania USA and she became the first runner-up in that year. In 2016, she again came back and that year she has crowned Miss Pennsylvania USA.
As of now, Elena is currently working as a reporter in WTAE. She joined WTAE in 2015 as a digital content creator. After a reporting and anchoring stint at a television station in Erie, Elena returned to WTAE to a general assignment reporting role in 2018.

Elena LaQuatra stands at the height of 5 feet and 7 inches. However, the information regarding her weight remains unknown. Elena looks very attractive with beautiful Dark Brown eyes and Dark Brown hair. Also, she has a Slim and Lean body physique. The details regarding her body measurements remain unknown.

News Reporter: She has not mentioned any information regarding her incomes or earnings until now. However, according to www.payscale.com the average income of a news reporter in WTAE is estimated to range from $30,000 to $60,000

Sponsorship: As she has more than 13.2k followers on her Instagram account, advertisers pay a certain amount for the post they make. Considering her latest 15 posts, the average engagement rate of followers on each of her posts is 8.12%. Thus, the average estimate of the amount she charges for sponsorship is between $90.75 – $151.25.

Q: What is Elena LaQuatra’s birthdate?

Q: What is Elena LaQuatra’s age?

A: Elena LaQuatra is 29 years old.

Q: What is Elena LaQuatra’s height?

A: Elena LaQuatra’s height is 5 feet and 7 inches.

Q: Who is Elena LaQuatra’s fiance?

A: Elena LaQuatra is Engaged at the moment.

Q: What is Elena LaQuatra’s Net Worth?