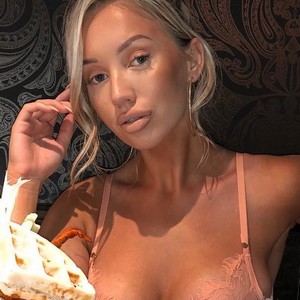 Beauty has varied throughout the times, but Elle Darby has perfectly done the justice for the new definition of beauty in the 21st century. Her attractive looks and seductive body figure has gained massive attention of the YouTube audiences  Not even a single post on her social media can be ignored by the people while admiring her beauty and curvy physique she has.

Elle Darby is a British YouTuber and Fitness model who has earned a lot of fame for his fitness routines, nutrition advice, product reviews and travel vlogs which she uploads in her channel, Elle Darby. Right now, she has earned more than 188k subscribers.

Not just that, her channel has garnered a total of more than 18 million views from her videos. Other than YouTube, she has lots of fan followings on her various social media platforms. Also, she has more than 142k followers on her Instagram alone at the time of writing this article.

Elle darby proudly presents the changes she has made to her face and claims to take charge and do something about the things you dislike. Having that said, she has done eye surgery in order to overcome the insecurity of her lazy eye. Not just that she also did her lips job and cheek job. Luckily, everything went right and she had no complications after her surgeries.  She now happily flaunts her beauty and perfection.

Elle Darby is a beautiful lady with an amazing physique. She has won the heart of millions of people all around the world with her hot and sizzling body. Among the millions of people, Connor Swift is the guy who admires both external and internal beauty of hers.

People are crazy fans of hers by looking at her attractive body, whereas Connor is the one who immensely loves her for who she is inside and out. HG is the proprietor of Swift Athletics, a lifestyle fitness apparel company and a fellow YouTuber. They have been dating each other for more than five years. They are looking forward to introducing a new chapter to their romantic life.

At the moment, they are very happy living together. The fitness couple is adored by their fans and often stated as the cute couple on Instagram. They are seen working out together, traveling places and creating memories. Currently, they are planning to take a leap to start a new journey of their love life. It’s just a matter of time till they declare the good news regarding their relationship. Stay tuned.

Elle was shamed by the hotel owner? Controversy about Elle

Elle Darby was once being shamed By The Owner Of White Moose Hotel for asking a free stay at his hotel. She asked for a free stay in return for the social media publicity of the hotel.

The owner could simply take it as an offer and reply a ‘NO”, but he mocked her online claiming that she is a freebie and lacks self-respect.

This incident affected the image Elle had maintained so far and dragged her into gossips and controversies. However, undoubtedly, Elle bounced back with positivity and applaudable professionalism.

Considering her latest 15 posts, the average engagement rate of followers on each of her post is 8.86%. Thus, the average estimate of the amount she charges for sponsorship is between $429.75 – $716.25.

Merchandise: As a popular YouTuber, many of her fans and viewers have asked for her own merchandise. Fortunately, she has provided his own merchandise which is sold through, elledarbyfit.com.

At the moment, she mostly sells custom-made Fitness Guide with various stickers and prints. The prices of the merchandise range from $30-$60  which is very affordable and gets ‘sold out’ time and again.

So is the case for  Elle Darby, as most of her earnings and incomes come from YouTube. The subscribers and viewers count of her has risen significantly over the years.

Currently, she has more than 188k subscribers on her channel with an average of 18,636 views daily.

Net Worth: According to socialblade.com, from her YouTube channel, she earns an estimated $3k – $48.5k in a year calculating the daily views and growth of subscribers.

Sibling:    She has a sister who is also a fellow YouTuber. her name is  Lucy Jessica Carter.

Education:    While she was in Bristol, she attended the University of the West of England.

Elle Darby started her YouTube channel on February 26, 2014, and uploaded her first video titled “Hair Amore Introduction.” Since then she has been uploading various fitness routines, nutrition advice, product reviews, and travel vlogs.

Till now, out of all her videos, “POST BIKINI SHOW FOOD | 10,000KCAL CHALLENGE” is the most popular videos in her channel. It has racked more than 1M views as of now.

At the moment, her channel is growing day-by-day with over 188k following her video content. Also, she is consistent in uploading videos as she uploads videos 3-4 times a week.