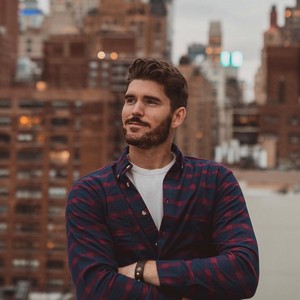 Erik Conover is an adventure filmmaker who currently lives in New York. He is fond of creating a travel series featuring various destinations all around the world. It is not a surprise that he has signed with Ford Models in New York City as a model.

Erik Conover is an American YouTuber who is best-known for uploading travel vlogs, and filmmaking in his channel, Erik Conover. Right now, he has earned more than 652k subscribers. Not just that, his channel has garnered a total of more than 82,197,767  views from his videos. Other than YouTube, he has lots of fan followings on his popular social media platforms. Also, he has more than 96.4k followers on his Instagram alone at the time of writing this article.

Sponsorship: As he has more than 96.4k followers on his Instagram account, advertisers pay a certain amount for the post they make. Considering his latest 15 posts, the average engagement rate of followers on each of his post is 7.93%. Thus, the average estimate of the amount he charges for sponsorship is between $390 – $650.

YouTube: YouTube has been a platform where people can work by connecting with viewers and getting paid for the ads viewers watch in the process of watching their videos. So is the case for Erik Conover, as most of his earnings and incomes comes from YouTube. The subscribers and viewers count of his has risen significantly over the years.  Currently, he has more than 652k subscribers on his channel with an average of 149,932 views daily. According to socialblade.com, from his YouTube channel, he earns an estimated $13.5K – $215.9K in a year calculating the daily views and growth of subscribers.  Thus, evaluating all his income streams, explained above, over the years, and calculating it, Erik Conover’s estimated net worth is $600,000-$700,000.

Erik Conover is a travel enthusiast who loves to travel and make travel series. He forecasts informative, practical, and stylish series of destinations all around the world. Regarding the relationship status of Erik Conover, he recently broke up with Jessica Clements, in 2016. She is also a fellow YouTuber who has been featured in Erik’s channel. They started dating in 2012. They met in a modeling agency, where they showed up at the same time for a job. After 4 years of togetherness, they broke up in 2016.

At the moment, he is living a single life, focusing on his career. He is out of the relationship and serious about his profession and nourishing his filmmaking skills.

Childhood:    He had a best childhood one could ever have because his parents were really supportive of his needs and interest. His childhood has helped him a lot to gain success in his career.

Education:    In 2013, he graduated with a Bachelor of Arts in Communications and Theater from Northeastern University.

Erik Conover started his YouTube channel on  March 28, 2012, and uploaded his first video titled “NEW YORK CITY APARTMENT TOUR.” Since then he has been uploading various travel vlogs and filmmaking.

Till now, out of all his videos, “NUDE BEACH IN THE CARIBBEAN” is the most popular videos in his channel. It has racked more than 9.5 million views as of now.

At the moment, his channel is growing day-by-day with over 652k following his video content. Also, he is consistent in uploading videos as he uploads videos 3-4 times a week.

However, rumors regarding his relationship appears here and there which are not significant and are unconfirmed.