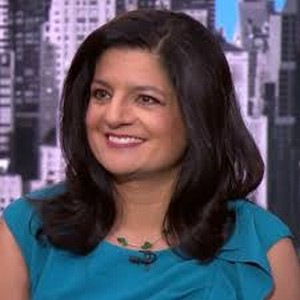 Indira A.R. Lakshmanan was born in 1969 in Bethesda, Maryland, USA. Since she was a kid, she was very studious. Her hard work and skills led her to achieve a National Merit scholar and Radcliffe National Scholar in the world’s top Harvard University.

Talking about her profession, she is known for the applaudable work as a politics reporter for The Boston Globe and Washington Week panelist on Public Broadcasting Service.


She has been at the campaigns of Barack Obama, John McCain, and Hillary Clinton. Not just that, she is very close to the secretary of State Hillary Clinton and John Kerry for the work purpose.

Journalist: According to poynter.org,  the average salary of the reporter is  $43,640 per annum. However, Indira has not revealed her income due to privacy concern. Moreover, she is also an executive editor at Pulitzer Center on Crisis Reporting Washington columnist, The Boston Globe. So, she earns quite a good amount from there also. Sadly, the salary has not been revealed anywhere.

Indira A.R. Lakshmanan has made such professionalism such that there is no space for her personal life in the public media. She has not given a single hint about her relationship status. Currently, she is focused on her work and career. it is just a matter of time that she will think about her love life and share it with the media.

Education:    Indira has been very talented and studious since she was a kid. She is the recipient of National Merit Scholar and a Radcliffe National Scholar at the world’s top institute; Harvard University. Having said that, she scored top Gpa from the university and graduated in the History of Art and Architecture. For further studies, she attended the University of Oxford with a Rotary Scholar in Latin American studies. After following years she was awarded as a  Nieman journalism fellowship in the Harvard University.

Indira A.R. Lakshmanan started her career as the executive editor at the  Boston Globe columnist and the Pulitzer Center on Crisis Reporting. She is the first Newmark chairman in journalism ethics at Poynter.

Apart from that, she also attends numerous campaigns, interviews, and revolution worldwide with famous personalities like Barack Obama, Hillary Clinton, and John Kerry.


Having said that, she occasionally hosts the national public radio programs, namely,  On Point, Here and Now, Weekend Edition, The Takeaway, 1A, and The Diane Rehm Show.