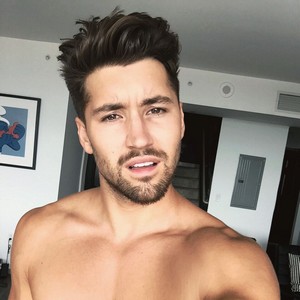 The way Jeffrey Wittek transforms a person’s appearance just by playing their hair is exceptional. Due to his unique sense of style and his way of connecting with his clients, he is one of the best stylists in the US. Not just that, he looks really attractive and possesses his own unique fashion sense. So, it is not a surprise that he has modeled for various brands and magazines.

Jeffrey Wittek is an American YouTuber and Stylist who is best-known for uploading hair styling tips and tricks videos in his channel, Jeffrey Wittek. At the moment, he has earned more than 340k subscribers. Also, his channel has garnered a total of more than 13.2 million views as well.

Besides YouTube, he has lots of fan followings on his other social media platforms. Also, he has more than 682k followers on his Instagram alone at the time of writing this article. Also, he has worked with famous celebrities such as DJ Pauly D and Big Sean.

Jeffrey Wittek is a handsome stud. Many girls are attracted to talents and appearance he has got. It is obvious for people to know about his love life. And luckily, his romantic life is just as successful as his career is. Recently, they celebrated and completed third year anniversary with none other than, Cierra Ramirez.

Cierra is even more popular than Jeffrey is, as she has appeared on top TV series and films in Hollywood. The most successful being the role was of Kathy on the television series namedThe Secret Life of the American Teenager. Also, she has more than 2 million followers on her Instagram account.

They have been together since the very start, even before they were not as successful as they are today. They have literally pushed each other up in their life and career, which is why they are called ‘Relationship Goals.”

In the glamour and Hollywood industry, it is common for celebrities to be unfaithful to their partner and part their ways. But, that does not go for Jeffrey, as he is very loyal and committed towards Cierra and she does the same. That is why they have been an example for people who tend to give up on their relationship quite easily.

Sponsorship: As he has more than 682k followers on his Instagram account, advertisers pay a certain amount for the post they make. Considering his latest 15 posts, the average engagement rate of followers on each of his post is 12.6%. Thus, the average estimate of the amount he charges for sponsorship is between $2,037 – $3,395.

Merchandise: As a popular YouTuber, many of his fans and viewers have demanded his own merchandise. Fortunately, he has provided his own merchandise which is sold through, fanjoy.co. At the moment, he mostly sells a custom-made T-shirt, hoodies and other accessories with various stickers and prints. The prices of the merchandise range from $10 – $40 which is very affordable and gets ‘sold out’ time and again.

YouTube: Jeffrey Wittek’s most of his earnings and incomes comes from YouTube. The subscribers and viewers count of his has risen significantly over the years. Currently, he has more than 2.2 million subscribers on his channel with an average of 692,774 views daily.

Net Worth: According to socialblade.com, from his YouTube channel, he earns an estimated $62.3K – $997.6K in a year calculating the daily views and growth of subscribers. Thus, evaluating all his income streams, explained above, over the years, and calculating it, Jeffrey Wittek’s estimated net worth is anywhere between, $1.5 million – $2 million.

Childhood:    He has not given any details about  her childhood till now. Looks like she is very focused about nourishing her present status and career.

Till now, out of all his videos, “HOMELESS MAN MAKEOVER AMAZING TRANSFORMATION *heart warming*” is the most popular videos in his channel. It has racked more than 250 million views as of now.

At the moment, his channel is growing day-by-day with over 340k following his video content. Also, he is consistent in uploading videos as he uploads videos twice or thrice a week.