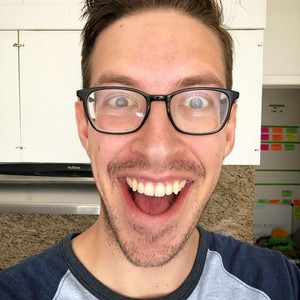 Keith Habersberger is a comedian who was the former member of BuzzFeed in Los Angeles. Due to his popularity, his own collaborative YouTube channel, The Try Guys, has earned more than 4 million in just 8 months. His humorous contents as a video producer have garnered him lots of fan following. One of the reasons why Buzzfeed has grown so much is because of the personality like him who knows how to entertain people and keep them engaged till the end of the video he appears on.

Keith Habersberger was born on June 18, 1987, in Carthage, TN. He is best known for his comedy acts and talent. He got limelight after being a part of Buzzfeed, a pop culture news site. He has won the heart of many by hilarious videos that he features his social media profiles. He has garnered more than 1.1 million followers on his Instagram. Right now, he works as an executive producer in the YouTube channel named, The Try Guys.

Sponsorship: As he has more than 1.1 million followers on his Instagram account, advertisers pay a certain amount for the post they make. Considering his latest 15 posts, the average engagement rate of followers on each of his post is 6.03%. Thus, the average estimate of the amount he charges for sponsorship is between $2,336.25 – $3,893.75.

Merchandise: As per the demand of his fan, he has started the merchandise by collaborating with his group, The Try Guys. He sells varieties of products such as hoodies, T-shirt, and accessories on his website tryguys.com. The high-quality product ranges from $20-$50. They are often sold out because of its high-demand.

YouTube: According to socialblade.com, his estimated earning per year through YouTube is $213 – $3.4K with an average daily view of  2,369. He created his YouTube channel on September 20, 2013. Within the time, he has garnered altogether 440,802 views in his channel, Keith Habersberger. Not only that he gets his fair share of earnings as an executive producer in the popular channel, The Try Guys.

Keith Habersberger’s charming personality makes anyone fall in love with him. The lucky person who is able to steal his heart is Becky Habersberger. After dating for many years, they got married in September 2017. She is a make-up artist who is famous for SFX makeups and transformations.

Keith and Becky have quite a different path as their career. But, they are together for many years despite their dissimilarities. This shows that they are supportive and caring about each other. Their social media profiles are flooded with each others picture with cheesy captions. This proves that they are passionately in love with each other.

Father:      Keith is not so open about his family background. He is more focused on strengthening his skills and talent. He once featured his father on one of his YouTube video. However, his father name is unknown yet.

Mother:    He seems to be very close to his mother. Their bond cannot be explained in words. But, he hasn’t revealed his mother’s name yet.

Sibling:    There is no information about his siblings too. Looks like he is completely introvert when it comes to family.

Education:    Keith graduated from Illinois State University. He got his bachelor’s degree in  Bachelor of Science in theater and acting from that university. That has surely helped him in building a career where his interest lies. However, Keith has done justice to his qualification at the moment.

Keith did a lot of comedy programs in Chicago with his comedy group “Octavarius” in 2013. Later on, he moved to Los Angeles from Chicago and joined BuzzFeed. He was a member of The Try Guys group in the BuzzFeed. He got in the spotlight due to his hilarious contents and creative video producing. Currently, he is a freelance editor and producer. He also has a YouTube channel,  Keith Habersberger which has 110k subscribers.