Kennedy Claire Walsh is a very beautiful teenage girl who is best known for the creative content she delivers through her YouTube channel, Kennedy Walsh. She is also admired for her fashion sense and lifestyle

Kennedy Claire Walsh is an American YouTuber YOUTUBE STAR who is best-known for uploading makeup tutorials and tricks, beauty tips, product reviews, and travel vlogs in her channel, Kennedy Walsh. At the moment, she has earned more than 651,000 subscribers. Also, her channel has garnered a total of more than 31,657,470  views as well. Besides YouTube, she has lots of fan followings on her other social media platforms. Also, she has more than 300k followers on her Instagram alone at the time of writing this article. 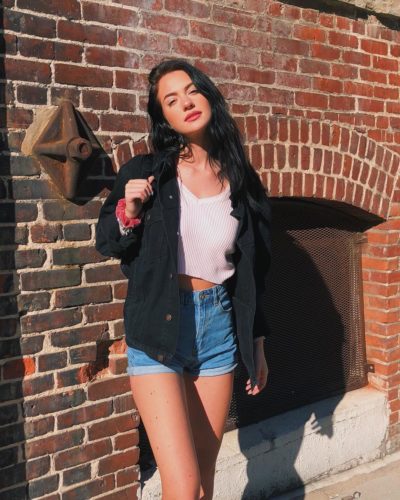 In order to keep her skin glowing and shining, Kennedy uses a lot of moisturizers and does her makeup almost every day. After moisturizing her skin, she then applies a concealer, which hides dark circles, age spots, blemishes, and more. She then applies powder and puts on a lip balm before applying a bronzer. She applies a bronzer to make the skin look sun-kissed. She put on some highlighter and does her eyebrows to tint and shape up brows in an instant.

Then, she puts a little shimmer on the inner side of her eyes before putting mascara to enhance the eyelashes. Thereafter, she finishes her routine with a lip liner to create luscious lips. She has many female fans who look up to her for her makeup routines. She made one video on makeup routine called, ‘MY EVERYDAY MAKEUP ROUTINE’.

Kennedy was born on January 5, 2000, in the United States of America. Her mother Jen Seidel, is a famous Body Painter known as Jen the Body Painter. Her father’s name is Aiden Walsh who is an owner at the street combat system and lives in Maryland. Her parents got divorced a long time ago. She was raised along with her siblings. Kennedy is the youngest of all three. Her brother’s name is Brandon and a sister named Claudia. She is very close to her brother Brandon, who also makes videos with her sometimes.

She was socially active in her middle school but later she was socially inactive. She got more focused on staying home and watching YouTube videos. Which eventually gave her an idea about starting her own YouTube channel. Kennedy worked at the restaurant but due to her introverted and sensitive nature, she quit the job after a year.

Kennedy also confessed that she never had any interest in attending college, so she dropped out of college to become a YouTube Star.

Kennedy Walsh is a very good-looking, plus talented girl. But, looks like she has not found someone worth her beauty and talent. On the contrary, it might be the case that she doesn’t want to reveal anything about her relationship. So, it is better to mention that she is single and doing her best to make her future better.

Looking at her social media, there is not even a single post that could give a hint of her relationship status. She seems to be very reserved about her personal life. She doesn’t want to drag unwanted attention through relationship issues. Currently, she is concerned about nourishing her strengths and increasing her fandom.

Sponsorship: As she has more than 300k followers on her Instagram account, advertisers pay a certain amount for the post they make. Considering her latest 15 posts, the average engagement rate of followers on each of her post is 30.45%. Thus, the average estimate of the amount she charges for sponsorship is between $905.25 – $1,508.75.

Merchandise: As a popular YouTuber, many of her fans and viewers have demanded her own merchandise. Fortunately, she has provided his own merchandise which is sold through, kennedywalsh.com. At the moment, she mostly sells a custom-made T-shirt, hoodies and other accessories with various stickers and prints. The prices of the merchandise range from $25-$90 which is very affordable and gets ‘sold out’ time and again.

YouTube: YouTube has been a platform where people can work by connecting with viewers and getting paid for the ads viewers watch in the process of watching their videos. So is the case for  Kennedy Claire Walsh, as most of her earnings and incomes come from YouTube. The subscribers and viewers count of her has risen significantly over the years. Currently, she has more than 651,000 subscribers on her channel with an average of 184,393 views daily.

According to socialblade.com, from her YouTube channel, she earns an estimated $16.6K – $265.5K in a year calculating the daily views and growth of subscribers. Thus, evaluating all her income streams, explained above, over the years, and calculating it,  Kennedy Claire Walsh’s estimated net worth is anywhere between, $500,000-$600,000.

Kennedy Claire Walsh started her YouTube channel on January 31, 2011, and uploaded her first video titled “What PROM is REALLY like (prom vlog).” Since then she has been uploading various makeup tutorial and tricks, beauty tips, product reviews, and travel vlogs.

Till now, out of all her videos, “I let TINDER pick my ASMR” is the most popular videos in her channel. It has racked more than 4 million views as of now. At the moment, her channel is growing day-by-day with over 651,000 following her video content. Also, she is consistent in uploading videos as she uploads videos 3-4 times a week.

It is obvious that having bad information about any celebrity can harm their career in many ways. In the case of Kennedy, she is an introverted girl, who likes staying at home most of the time. So, she doesn’t want any undesired attention from rumors and controversies.

A: Kennedy Claire Walsh is single at the moment.

Q: What is Kennedy Claire Walsh’s Net Worth?