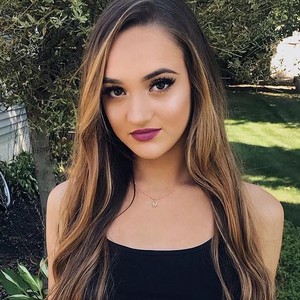 Maddie Joy, a young and beautiful lady is a very popular Youtuber, Traveler, and a Makeup enthusiast. Her social media namely Snapchat, Twitter and YouTube are overcrowded with lots of fan following. She has successfully been in a limelight of YouTube with the collaboration of her loving boyfriend, Elijah Wireman. Together they have entertained lots of viewers with their videos of challenges, pranks, vlogs, mukbangs and many more in a very short period of time.

Maddie Joy is an American YouTuber who is best-known for uploading pranks, challenges, reaction, comedy videos, mukbang and vlogs in her channel, Maddie and Elijah. At the moment, she has earned more than 5.4 million subscribers as of June 2018. Also, her channel has garnered a total of more than 61,218,330 views as well. Besides YouTube, she has lots of fan followings on her other social media platforms. Also, she has more than 56.7k followers on her Instagram alone at the time of writing this article.

Boyfriend’s name:    Elijah Wireman – He is also a YouTuber himself.

Previous relationship:   She has not mentioned anything about her previous love affairs and relationships.

Present status:  Elijah Wireman is the perfect another half of Maddie Joy. The young couple seems very happy and satisfied with their relationship. Her Instagram posts are the proof on how passionate and admiring this lovely couple is. The way they showcase their love shows that they are meant to be for each other. Even if they are very young and their relationship seems to be the one which will last for a very young time. Nowadays, young boys and girls have no value of relationship and love, and here they are loving and holding on to each other very strongly. They are one of the few rare gems of a young couple.

Sponsorship: As she has more than 56.7k followers on her Instagram account, advertisers pay a certain amount for the post they make. Considering her latest 15 posts, the average engagement rate of followers on each of her post is 15.59%. Thus, the average estimate of the amount she charges for sponsorship is between $236.25 – $393.75.

Merchandise: Being a popular YouTuber, her fans have highly demanded to produce their own merch so that they can shower more love for her. Maddie has showcased various merchandise on her website, bonfire.com, such as hoodies, sweatshirts, tank tops and many more. They are also actively engaged in fundraising programs through their merchandise.

YouTube: YouTube has been a platform where people can work by connecting with viewers and getting paid for the ads viewers watch in the process of watching their videos. So is the case for Maddie Joy, as most of her earnings and incomes come from YouTube. The subscribers and viewers count of her has risen significantly over the years. Currently, she has more than 5.4 million subscribers on her channel with an average of 154,032 views daily.

According to socialblade.com, from her YouTube channel, she earns an estimated $13.9K – $221.8K in a year calculating the daily views and growth of subscribers. So, from the overview of her overall income stream, it can be estimated that her total net worth is around $300k-$400k.

Sibling:    She has a younger sister but due to her preference of keeping her personal life private, her sister’s name is not revealed yet.

Maddie Joy started her YouTube channel on June 18, 2016 and uploaded her first video on July 1, 2016 titled “BOYFRIEND/GIRLFRIEND TAG!.” Since then she has been uploading various pranks, challenges, reaction, comedy videos, mukbang and vlogs.

Till now, out of all her videos, “COUPLES NIGHT ROUTINE 2018!” is the most popular videos in her channel. It has racked more than 9.5 million views as of now.

At the moment, her channel is growing day-by-day with over 5.4 million following her video content. Also, she is in uploading videos as she uploads videos 3-4 times a week.