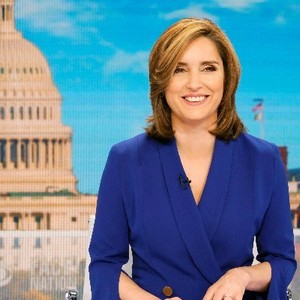 Margarett Brennan is an American journalist, who is working as current moderator of Face the Nation on CBS News, and the network’s senior foreign affairs correspondent. Previously, she worked as White House correspondent CBS and has covered Washington since 2012. Margarett has been honored and awarded with several prestigious awards, she has been named as one of the top 100 Irish-American in business and in media and was also awarded the Fullbright Award for international understanding.

Margaret Brennan was born on March 26, 1980, in Connecticut, United States. Margaret is of Caucasian descent. Margaret was born to Edward and Jane Brennan. Her father Edward is a senior director at the Guardian Life Insurance Company of America in New York and her mother is an elementary school art and art history teacher in the Pennsbury, PA, school district. Margaret Brennan’s childhood was really great amidst a lot of care and love from her parents. They were continuously meeting everything Margaret requires to pursue what she wants. In simple terms, Margaret had undergone a childhood that has unquestionably played a pivotal role to achieve the progress Margaret is getting momentarily.

Margaret graduated with honors from the Convent of the Sacred Heart in Greenwich, Connecticut, in 1998. She then joined the University of Virginia and graduated with the highest distinction in 2002 with a Bachelor of Arts degree in Foreign Affairs and Middle East Studies with a minor in the Arabic language.

Margaret is happily married to a guy named Yado Yakub. Yado is a judge advocate in the United States Marine Corps. The couple got married in the year 2015 and has been living a wonderful life since then. On September 11, 2018, they welcomed their first son together and their second son on April 28, 2021. Margaret has shared some photos of her small family on social media and looking at their pictures there is no doubt saying that the couple is living very happily.

Margaret started her career in business news in 2002 at CNBC. She worked as a producer for prominent financial journalist Louis Rukeyser. She later worked as a producer on Street Signs with Ron Insana,  for which she coordinated guest bookings and produced interviews with former President George W. Bush and former Secretary of State Colin Powell. She covered the financial crisis with a focus on consumer issues as a CNBC correspondent.

On June 29, 2009, she left CNBC and joined Bloomberg Television. She anchored InBusiness with Margaret Brennan, which is a weekday program broadcast live from the New York Stock Exchange that covered the top political, economic, and global financial news impacting the marketplace. Margaret covered top breaking news stories while in Bloomberg including,  the European debt crisis, the largest insider trading case in U.S. history, and the BP oil spill.

In 2012, Margaret left Bloomberg and joined CBS News in July of 2012. She reported on the White House throughout the Obama and Trump administration for CBS programs and is a substitute anchor on CBS This Morning and the CBS Evening News. Brennan was also part of the CBS News team honored with a 2012-2013 Alfred I. Dupont-Columbia Award for coverage of the Newtown tragedy. She has covered many diplomatic negotiations during her career in CBS News, which includes the nuclear deal with Iran, the chemical weapons deal in Syria, and the reopening of relations with Cuba.

Margaret Brennan stands at the height of 5 feet and 7 inches. However, the information about Margaret Brennan’s weight remains unknown. Margaret looks very attractive with beautiful Dark Brown eyes and brown hair. Also, she has a Slim and Lean body physique. However, the detailed statistics showing Margaret’s body measurements are not known.

Journalist: Until now, Margaret has not shared information about her income and earnings. However, according to www.payscale.com the average income of a journalist is estimated to be around $41160

Thus, calculating Margaret’s income streams, which we mentioned above, over the years, Margaret Brennan estimated net worth is $500,000 – $600,000.

Q: What is Margaret Brennan’s birthdate?

Q: What is Margaret Brennan’s age?

A: Margaret Brennan is 42 years old.

Q: What is Margaret Brennan’s height?

A: Margaret Brennan’s height is 5 feet and 7 inches.

Q: Who is Margaret Brennan’s Husband?

A: Margaret Brennan is Married at the moment.

Q: What is Margaret Brennan’s Net Worth?

It is apparent that several bad information about figures like Margaret Brennan involving them spread here and there. Margaret haters can make stories and attempt to take her down due to jealousy and envy. Yet, Margaret has nevermore given much thought to it. Preferably Margaret concentrates on positivity and love, Margaret’s fans and followers give. Margaret has done excellent work to keep herself distant from controversies until this day.