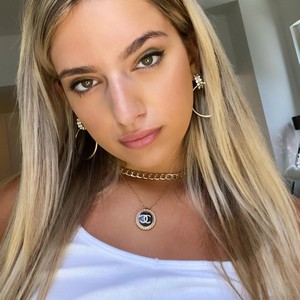 Maria Ciuff is a radio host who is best known as an on-camera host in the Barstool Sports company and co-host of the  Barstool’s show Chick In The Office.
Along with her journey to success, we are going to cover many facts and information about her in this article.

Maria Ciuffo was born on July 26, 1997, in the United States. Maria is of Caucasian descent.   She has posted photos of her grandmother and grandfather on Instagram but she has not mentioned anything about her parents until now. She has a sister named Melissa. Ever since Maria was a kid, she was passionate about fashion and modeling. She has not given any insight into her childhood until now. It seems that she is very focused on her career.

She was a student at the Fashion Institute of Technology. However, she dropped out of school due to her success with Barstool  Sports.

Maira is not just talented but also a very beautiful girl as well. She has earned huge fame as well and 372k followers are evidence of her thriving popularity. Being sich famous many might want to know about Maria’s relationship status as well.

Talking about Maria’s relationship status, she is currently dating a guy named Henry Lockwood. Henry and Maria both work in Barstool. Henry is a Barstool producer. The couple started dating each other in 2017. It has been 3 years the couple has stayed together so it is obvious that they are very close to each other and are deeply in love. We looked through her social media account and also found some photos of them together and looking at their pictures, there is no doubt that they are very happy to have each other in their lives.

Maria Ciuffo is best known as a radio host and her success in Barstool Sports. Maria joined Barstool Sports just as an intern but little did she knew that she would gain sich popularity and success from Barstool. After her huge success in Barstool Sports, she dropped out of her college. She along with Fran Mariano became the co-host of the show from Barstool Sports called Chicks In The office. The show featured stories in pop culture including celebrity relationships and breakups, TV show recaps, and special celebrity guest interviews. She also co-created the Instagram account for Chicks in the Office as well.

Maria Ciuffo stands at a height of 5 feet and 4 inches. However, the information regarding his weight remains unknown. Maria looks very attractive with beautiful Dark Brown eyes and Dark Brown hair. Also, she has a slim and curvy body figure body physique. The details regarding his body measurements remain unknown.

Radio Host: Until now, Maria has not revealed her exact earning. However, according to www.payscale.com an average salary of a radio host is estimated to be $45,283 per year.

Sponsorship: As she has more than 372k followers on her Instagram account, advertisers pay a certain amount for the post they make. Considering her latest 15 posts, the average engagement rate of followers on each of her posts is 7.36%. Thus, the average estimate of the amount she charges for sponsorship is between $919.5 – $1,532.5.

Q: What is Maria Ciuffo’s birthdate?

Q: What is Maria Ciuffo’s age?

Q: What is Maria Ciuffo’s height?

A: Maria Ciuffo’s height is 5 feet and 4 inches.

Q: Who is Maria Ciuffo’s Boyfriend?

A: Maria Ciuffo is In a relationship at the moment.

Q: What is Maria Ciuffo’s Net Worth?

The founder of Barstool Sports founder Dave Portnoy and Maria had a controversy. Dave said that Maria would not be able to put her face in front of a camera in five years, because people will throw up. Maria heard the comments and confronted co-hosts Kevin Clancy and Liz Gonzales. Even the co-hosts sided with Maria and asked Dave to apologize but he didn’t and instead He said: “There’s no apology coming for that.”