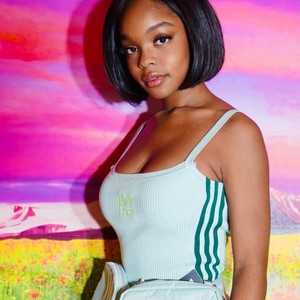 Marsai Martin is an American actress who is known for her role as Diane Johnson in the ABC comedy series Black-ish. Marsai is one of the most promising young talents in Hollywood right now and has been titled as the youngest person ever to produce a movie in Hollywood at the age of 13.

In this article, we have gathered all the information there is to know about her. We have covered her birthdate, family, education, romantic life, and net worth. So, stick to the end.

Marsai Martin was born on August 14, 2004, in Plano, Texas. Marsai is of African-American descent. Martin was born to Carol and Joshua Martin. Ever since Marsai was a kid, she was passionate about acting. She had a childhood in a very caring and loving environment. Her parents were really supportive and attentive to her needs. In simple words, she got a childhood that surely made her a talented and independent woman.

Marsai is a famous and well-known actress. Being such famous, it is obvious that there would be lots of people around who would have a keen interest to know about her and explore her especially her relationship status.

Marsai’s career started after a glamour pictorial. The photographer gave them a discount in exchange for her father’s promise that he would submit the photos taken to talent agencies. The photos were sent out to four agencies and one of these immediately signed her. At the age of five, she landed her first national commercial for Choice Hotel. Her family then moved to Los Angeles in 2013 so she could pursue an acting career.

In 2014, Marsai got an opportunity to play a role in the ABC comedy series Black-ish. Her fame got boosted rapidly after her appearance in the series and she also won tons of awards for her breakthrough role. Marsai received numerous awards and nominations, including three NAACP Image Awards for Outstanding Supporting Actress in a Comedy Series and a Young Artist Award. She has received six NAACP Image Awards nominations and two Screen Actors Guild Awards for Outstanding Performance by an Ensemble in a Comedy Series.

Marsai made her film debut playing a lead role in the Amazon Studio’s original film An Amazing Girl Story Melody 1963: Love Has to Win set to Detroit during the Civil Rights Moment. Marsai starred in her first studio feature film, the comedy Little, for Universal Pictures in 2019. At the age of 13, she became executive producer of the film, making her the youngest person in Hollywood to ever produce a movie.

Marsai Martin stands at the height of 5 feet and 2 inches. However, the information regarding her weight remains unknown. Marsai looks very attractive with beautiful Dark Brown eyes and Dark Brown hair. Also, she has a Slim and Lean body physique. The details regarding his body measurements remain unknown.

Actress: She has not disclosed her exact earnings until now. However, according to www.ziprecruiter.com an average salary of an actress is estimated to be around $91,401 a year.

Sponsorship: As she has more than 2.8 million followers on her Instagram account, advertisers pay a certain amount for the post they make. Considering her latest 15 posts, the average engagement rate of followers on each of her posts is 7.05%. Thus, the average estimate of the amount she charges for sponsorship is between $5,438.25 – $9,063.75.

YouTube: Currently, Marsai has more than 154k subscribers on her channel with more than 3.26 million views now.

According to socialblade.com, from her YouTube channel, Marsai earns an estimated $157 – $2.5K in a year.

Q: What is Marsai Martin’s birthdate?

Q: What is Marsai Martin’s age?

Q: What is Marsai Martin’s height?

A: Marsai Martin’s height is 5 feet and 2 inches.

Q: Who is Marsai Martin’s Boyfriend?

A: Marsai Martin is Single at the moment.

Q: What is Marsai Martin’s Net Worth?