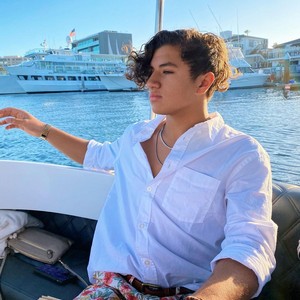 Mason Coutinho is a pop singer and also a famous social media star as well. He has earned a massive fan following through social media and his singing talent.

In this article below, we will be talking about many interesting facts and information about him. His family, education, career, relationship, and many more.

Mason Coutinho was born on December 13, 2004, in Australia. Mason is of Caucasian descent. He was born to Glen and Simonne Coutinho. Not much is revealed about them except their name.   He has four siblings. His brother Julez Coutinho is a famous social media personality and his brother Jack is also a Songwriter.

Ever since Mason was a kid, he was passionate about music. He had a childhood in a very caring and loving environment. His parents were really supportive and attentive about his needs. In simple words, he got a childhood that surely made him the talented and successful person he is right now.

Mason is undoubtedly one of the most known popular singer and social media stars who is known for his songs and fashion and lifestyle on Instagram. He has reigned over the hearts of millions of people through his songs and social media content. So it is pretty much clear that many of his fan members would have a keen interest to know about his current relationship status.

Mason was in a relationship with the famous singer, YouTube star Angelica Montero. Angelic is a famous social media star known for her ThisIsAngelic YouTube channel. The couple had also released a song together titled “Wait Up”. However, the couple later broke up. As of now, Mason has not spoken anything about his relationship status. He is most probably single at the moment. We will update you with the confirmed information as soon as he provides any information about his current relationship status.

Mason was passionate about singing since his childhood. He started singing from a very young age and at the very young age of 11, he had already started sharing his talent across the world through social media. He began his career by covering songs on social media. His cover of Luis Fonsi’s smash hit “Despacito” became viral which helped him gain wide fame. Eventually, he came up with his own song and released it in December 2017 which was “Right Now”. The videos as of now have gained over 57k views on YouTube. Throughout his career, he has got the opportunity to collaborate with many famous artists such as Tyga, Won-G, Bruny, and Angelic. Mason has gained wide popularity on social media as well. His Instagram account has gained over 163k followers as of now.

Mason has also made an appearance in the web show Brat Chat, in September 2018.

Mason Coutinho stands at the height of 5 feet and 11 inches. However, the information regarding his weight remains unknown. Mason looks very attractive with beautiful Dark Brown eyes and Dark Brown hair. Also, he has an Athletic body physique. The details regarding his body measurements remain unknown.

Singer: He has not revealed his exact income until now however, according to www.recruiter.com the average income of the singer is estimated to be around $45,000-$65,000.

Sponsorship: As he has more than 163k followers on his Instagram account, advertisers pay a certain amount for the post they make. Considering his latest 15 posts, the average engagement rate of followers on each of his posts is 3.12%. Thus, the average estimate of the amount he charges for sponsorship is between $491.25 – $818.75.

Q: What is Mason Coutinho’s birthdate?

Q: What is Mason Coutinho’s age?

A: Mason Coutinho is 16 years old.

Q: What is Mason Coutinho’s height?

A: Mason Coutinho’s height is 5 feet and 11 inches.

Q: Who is Mason Coutinho’s Girlfriend?

A: Mason Coutinho is Single at the moment.

Q: What is Mason Coutinho’s Net Worth?