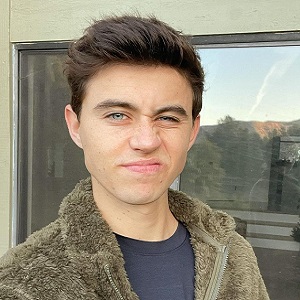 TikTok has taken the world by storm, and Nash Grier has taken TikTok world by storm. Nash is one of the viral and rising stars where his fame has skyrocketed to 701.4k. Don’t mistake Nash as just another TikTok star, Nash has been popping videos showcasing his creativity, humor, and personality. No wonder Nash is producing viral videos one after another.

In this article, we have gathered all the information there is to know about Nash Grier. We have covered Nash Grier’s birthdate, family, education, romantic life, and net worth. So, stick to the end.

What is Nash Grier known for?

Nash Grier is a 23 years old American Social Media Star. Nash rose into fame and limelight for his lip-syncs to trending songs and voice-over, short funny videos, Family videos which he uploads on his TikTok account, nashgrier. Nash’s first major acting role was in Fullscreen’s The Outfield, which premiered on November 10, 2015. He also directed a music video for singer Bera called “I Look Good On You”. In 2017, Nash appeared in a movie called You Get Me.

Nash started out on TikTok just for fun and as a part of a trend, but, little did Nash know,  that he would have more than 701.4k people following Nash on TikTok alone. Not just that, Nash has extended his social reach on Instagram with more than 10.7 million followers as of now.

It didn’t take very long for Nash to gain wider popularity in Vine. As his popularity grew after he joined the social media app called Vine where he posted short funny videos, he joined a group called Magcon. Nash participated in the group with his brother Hayes and other Vine stars Cameron Dallas, Matthew Espinosa, and many more. The group was gaining wide popularity and a massive success however, the group broke and 2014 because of disagreement between members and the manager.

Nash Grier was born on December 28, 1997, in Greensboro, North Carolina. Nash is of Caucasian ethnicity. Nash Grier was raised by her mother Elizabeth Floyd and father Chad Grier. His father is now one of his managers. He is the second-oldest child in his family. His younger brother Hayes is also an internet sensation with more than 5 million followers on Instagram. His older brother Will is a football player who played as a quarterback, was drafted by the Carolina Panthers in the 2019 NFL Draft. He also has a half-sister named Skylynn.

Ever since Nash was a kid, he was passionate about entertainment. His boyhood was really great amidst a lot of care and love from his parents. They were continuously meeting everything he requires to pursue what he wants. In simple terms, he had undergone a childhood that has unquestionably played a pivotal role to achieve the progress he is getting momentarily.

He studied at Davidson Day School. He was at the same school when started vining.

After all those information you got, let’s move on to the part which everyone wants to know, which is his relationship. Nash has remained very open even about his personal life so most of the people who follow him on social media might already know about his beautiful fiance. Nash is engaged to a beautiful girl named Tyler Glavasis. The couple has been together for more than 5 years. They had started dating each other in 2015. They often appear in their social media feeds. Looking at their social media, they are really living their life very happily, and to complete their happy life god has blessed them with the best gift they could ever have, which is a son. He has a son named Malakai and now they are living in a small happy family.

Nash Grier stands at a height of 5 feet 10  inches (1.78 m). He weighs, 65 kg Nash looks very attractive with beautiful Hazel eyes and Dark Brown hair. Also, he has an athletic body physique. However, the detailed statistics showing his body measurements are not known.

What is Nash Grier’s NET WORTH and EARNINGS?

TikTok Sponsorship: As Nash has more than 701.4k followers on his TikTok account, advertisers pay a certain amount for the post they make.

Considering Nash’s latest 15 posts, the average engagement rate of followers on each of his post is 86.21%. Thus, the average estimate of the amount he earns from sponsorship is between $425 – $709.

Instagram Sponsorship: As Nash also has 10.7 million on his Instagram account, he would also make decent money from sponsorships. Considering Nash’s latest 15 posts from Instagram, the average estimate of the amount he earns from sponsorship is between $21,374 – $35,624.

Merchandise: At the moment, he mostly sells custom-made T-shirts, hoodies, and other accessories with various stickers and prints from www.amazon.com. The prices of the merchandise range from $14 – $42 which is very affordable and gets ‘sold out’ time and again.

It is apparent that several bad information about figures like him involving them spread here and there. His haters can make stories and attempt to take him down due to jealousy and envy. Yet, he has nevermore given much thought to it. Preferably he concentrates on positivity and love, his fans and followers return to him. He has done excellent work to keep himself distant from controversies until this day., In April 2013, Nash posted a Vine in which he said “Yes, it is Fag!” in response to an OraQuick at-home oral HIV test ad which stated, “Testing for HIV… it’s not a gay thing.” Nash later deleted the Vine but a recording of it reappeared in 2014 and he faced renewed scrutiny. Nash later apologized on Twitter saying that he was young, ignorant, and was in a bad place and also that he has moved on.

Q: What is Nash Grier’s birthdate?

Q: What is Nash Grier’s age?

Q: What is Nash Grier’s height?

Q: Who is Nash Grier’s Fiance?

A: Nash Grier is Engaged at the moment.

Q: What is Nash Grier’s Net Worth?