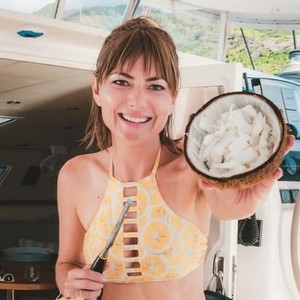 Nikki Wynn along with her husband, Jason, left everything they had to go on the trip of a lifetime. She was a successful makeup-artist before she decided to go on this crazy adventure in a 32-foot RV. They documented every of their adventure and experience to share their crazy adventure to the entire world via their YouTube channel. At the moment, they are sailing all over the world already crossing 10,000 miles mark in June 2018. They are teaching and inspiring people all over the world that ‘You cannot take all the money you make when you die but, it is the experiences that will be with you forever.’

Nikki Wynn is an American YouTuber, Traveler who was born in 1987 in Texas, US. She had a career in makeup-artist before she became a full-time traveler. She is best-known for uploading traveling vlogs in her channel, Gone with the Wynns. At the moment, she has earned more than 218k subscribers. Also, her channel has garnered a total of more than 40 million views as well. Besides YouTube, she has lots of fan followings on her other social media platforms. Also, she has more than 46.2k  followers on her Instagram alone at the time of writing this article.

Merchandise: As a popular YouTuber, many of her fans and viewers have demanded her own merchandise. Fortunately, she has provided his own merchandise which is sold through, gonewiththewynns.teemill.com. At the moment, she mostly sells a custom-made T-shirt, hoodies and other accessories with various stickers and prints. The prices of the merchandise range from $19 – $50 which is very affordable and gets ‘sold out’ time and again.

YouTube: YouTube has been a platform where people can work by connecting with viewers and getting paid for the ads viewers watch in the process of watching their videos. So is the case for Nikki Wynn, as most of her earnings and incomes comes from YouTube. The subscribers and viewers count of her has risen significantly over the years. Currently, she has more than 218k subscribers on her channel with an average of 37,357 views daily. According to socialblade.com, from her YouTube channel, she earns an estimated $3.4K – $53.8K in a year calculating the daily views and growth of subscribers.

Sponsored Review: Nikki and Jason make sponsored videos about various RVs which are up for sale. They elaborately explain all the features and prices of the RVs. They post the sponsored content on their YouTube channel where a lot of people watch them. Thus, evaluating all his income streams, explained above, over the years, and calculating it, Nikki Wynn’s estimated net worth is anywhere between, $300,000 -$400,000.

In an interview, Nikki told that they hated each other when they first saw each other. She told that she hated Jason’s arrogance. With the passing time, they got to know each other where his attitude turned to charming confidence whereas Nikki’s demeanor showed determination and independence. Life did its trick and from hating each other, they ended up marrying each other. If they can cross 75,000 miles together in an RV then, they would surely be together for rest of their journey together.

At the moment her relationship is going very strong without any signs of complications and problems. It shows her dedication and commitment to her relationship is unbreakable. Also, they have become an example of true love to the people around the world who give up on their relationships too easily.

Ten years of marriage…the ultimate adventure. Seven of those years as full time travelers, together 24/7 and we still love each other. Know we're sending some love your way too this Valentine's Day. Thanks for being a part of our adventure. EDIT and apologies… Face palm! In my valentine’s moment of reflecting on our relationship, I didn’t think how it could give the idea it’s our anniversary. We were married on June 16…and while all the lovely wishes were wonderful (thank you), I didn’t want everyone scratching their heads when our real anniversary comes around. Oops, I will blame it on the beer we were drinking.

Nikki Wynn started her YouTube channel on September 25, 2010 and uploaded her first video titled “Gone With The Wynns.” Since then she has been uploading various traveling vlogs.

Till now, out of all her videos, “Our Top RV Picks Under 30 feet” is the most popular videos in her channel. It has racked more than 2.1 million views as of now.

At the moment, his channel is growing day-by-day with over 218k following her video content. Also, she is consistent in uploading videos as she uploads videos once or twice a week.