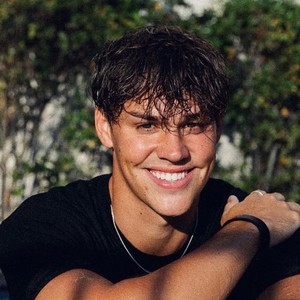 What is Noah Beck known for?

Noah Beck is a 21 years old American Social Media Star. Noah rose into fame and limelight for his dance videos, lip-syncs to trending songs and voice-over, short funny videos which he uploads on his TikTok account, noahbeck. His fame sky-rocketed after he joined the popular group of social media stars named Sway House. The group includes popular stars such as Bryce Hall, Anthony Reeves, Quinton Griggs, and more.

Noah started out on TikTok just for fun and as a part of a trend, but, little did Noah know,  that he would have more than 6.7 million people following Noah on TikTok alone. Not just that, Noah has extended his social reach on Instagram with more than 2.1 million followers as of now.

Also, he is a talented soccer player who plays at the NCAA Division-1 level with Portland Pilots representing the University of Portland.

Noah Beck was born on May 4, 2001, in Arizona, United States. Noah is of Caucasian descent. His father and mother have been featured on his TikTok videos. However, more details such as their name and work remain unknown. Noah has two sisters named Tatum and Haley who are both older than him.

Ever since Noah was a kid, he was passionate about soccer, modeling and fashion His boyhood was really great amidst a lot of care and love from his parents. They were continuously meeting everything he requires to pursue what he wants. In simple terms, he had undergone a childhood that has unquestionably played a pivotal role to achieve the progress he is getting momentarily.

Noah Beck completed his high school education from Real Salt Lake Academy, a public STEM charter school, a tuition-free school which is located in Herriman, Utah. After his graduation, he joined the University of Portland.

Noah Beck is one of the rising stars of TikTok so, it is obvious that his fans would like to know about his relationship status. So far, it seems that Noah is single but, ready to mingle as he uploaded a video with Alex Warren titled “FINDING NOAH BECK A GIRLFRIEND!!”

As he is a celebrity, rumors regarding his relationship status is inevitable. There was a rumor that Noah was dating the popular makeup-artist named James Charles. It was fueled when both of them frequently uploaded videos of them together. But, the rumor was limited to rumor as they both denied that they were romantically involved.

Regardless, it is a matter of time to find who will be his girlfriend in the coming days. Due to his resolution to keep his private life aside from the recognition and spotlight, he has not revealed his love companion or relationship status at this time.

Noah Beck stands at a height of 5 feet 11 inches (1.8 m). He weighs, 71 kg Noah looks very attractive with beautiful Hazel eyes and Dark Brown hair. Also, he has an athletic and shredded body physique. However, the detailed statistics showing his body measurements are not known.

What is Noah Beck’s NET WORTH and EARNINGS?

TikTok Sponsorship: As Noah has more than 6.7 million followers on his TikTok account, advertisers pay a certain amount for the post they make.

Considering Noah’s latest 15 posts, the average engagement rate of followers on each of his posts is 5.47%. Thus, the average estimate of the amount he earns from sponsorship is between $4,021 – $6,702.

Instagram Sponsorship: As Noah also has 2.1 million on his Instagram account, he would also make decent money from sponsorships. Considering Noah’s latest 15 posts from Instagram, the average estimate of the amount he earns from sponsorship is between $3,833.25 – $6,388.75.

Merchandise: At the moment, he mostly sells custom-made T-shirts, hoodies, and other accessories with various stickers and prints from redbubble.com. The prices of the merchandise range from $1 – $50 which is very affordable and gets ‘sold out’ time and again.

Q: What is Noah Beck’s birthdate?

Q: What is Noah Beck’s age?

Q: What is Noah Beck’s height?

Q: Who is Noah Beck’s Girlfriend?

A: Noah Beck is Single at the moment.

Q: What is Noah Beck’s Net Worth?