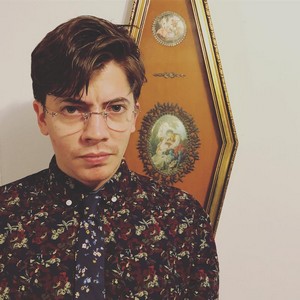 People persuade to gain happiness in life. They try so hard to get rid of anxiety and sorrow. Most of all a good music is a therapy to eradicate all the emotions and pain one is suffering. But, Rusty Cage is such a man that produces music to bring despair and sorrow to the listeners until they give up on the happiness of life. It is strange and funny at the same time. Scroll down to know more interesting facts about him.

Rusty Cage is an American YouTuber and Musician who has earned a lot of fame for his songs, web series which he uploads in his channel, Rusty Cage. Right now, he has earned more than 1.1 million subscribers. Not just that, his channel has garnered a total of more than 68 million views from his videos. Other than YouTube, he has lots of fan followings on his various social media platforms. Also, he has more than 72.2k followers on his Instagram alone at the time of writing this article. He gained recognition after composing a song named ‘The knife game song’, also known as “The Internet’s Most Dangerous Game”. This song went viral in 2011. He has contributed numerous original songs to YouTube.

Rusty Cage as a Musician

Rusty Cage is a singer and writer who can play multiple instruments as well. He gained recognition after releasing ‘The knife game song’. Since then, he continued producing songs on YouTube. He participated in the German Competition named “Unschlagbar”, where he performed the same song. He has produced various song series of The knife game. His recent song from the series is “Rusty Cage Vol. 3: Crowley”. His songs are mostly themed about death, sorrow, politics, and so on. He releases his song on the website,  rustycage.bandcamp.com. He recently released his albums Heretics, GANGSTALKERS, on his website, which already got sold out.

Considering his latest 15 posts, the average engagement rate of followers on each of his post is 13.46%. Thus, the average estimate of the amount he charges for sponsorship is between $297 – $495.

At the moment, he mostly sells a custom-made T-shirt, hoodies, music and other accessories with various stickers and prints. The prices of the merchandise range from $5-$100 which is very affordable and gets ‘sold out’ time and again.

YouTube: YouTube has been a platform where people can work by connecting with viewers and getting paid for the ads viewers watch in the process of watching their videos. So is the case for Rusty Cage, as most of his earnings and incomes comes from YouTube.

Currently, he has more than 1.1 million subscribers on his channel with an average of 121,567 views daily.

Net Worth: According to socialblade.com, from his YouTube channel, he earns an estimated $-20.1K  – $-321.8K in a year calculating the daily views and growth of subscribers. The subscribers and viewers count of his has risen significantly over the years.

Thus, evaluating all his income streams, explained above, over the years, and calculating it, Rusty Cage’s estimated net worth is $700,000-$800,000.

Rusty Cage is a pessimist guy who emphasizes sorrow, despair, and pain. His social media profile is filled with satanic symbols, suicidal presentations, and many brutal things. It is obvious that he doesn’t have a girlfriend in his life. To make the fact more genuine, he has not given any hints about his relationship on any of his social media. He has not posted a single piece of information or photo on his Instagram or Twitter.

Despite the fame and limelight, he has been an amazing individual who could give a separate space to his personal and professional life. Moreover, he seems to be low-key about relationship and romance. It is only a matter of time before he opens up about the romantic chapter of his life.

Rusty Cage started his YouTube channel on November 9, 2009, and uploaded his first video titled “BLAST EM! (Ukulele Rap) – Rusty Cage.” Since then he has been uploading various songs, web series.

Till now, out of all his videos, “The Family-Friendly Noose Song” is the most popular videos on his channel. It has racked more than 6 million views as of now.