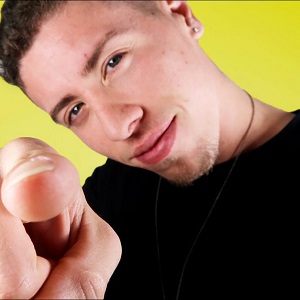 Ryan Paiz’s artistic talent is so great that even when his eyesight was near blind, he used to paint lifelike paintings. Not just his talent, he got a lot of attention for his positivity and charming personality which was really loved by fans of the popular family channel, “The Ace Family.” It was not even a surprise that as soon as he opened his channel, he was poured with a lot of support and love as in a matter of months he has already crossed 1 million subscribers on his channel. Without wasting any more time, let us know more about him in detail.

Ryan Paiz was born on July 15, 1992. He was raised and spent his childhood in Montreal, Canada alongside his sister, Catherine Paiz. Since his childhood, he was really into arts and sketch. With time, his skills got so good that his paintings look very real. Unfortunately, his eyesight got worse and worse as he grew up. It really affected his career in painting as eyesight is very important for things he does.

Luckily, Catherine and Austin were generous enough to pay everything for his treatment to make his eyesight better. And, the treatment was a success as his eyesight got better. Not just that, he started his YouTube career and got massive support from the people watching The Ace Family. At the moment, he has earned more than 1.2 million subscribers on his channel, Through Ryan’s Eyes. And more than 527k followers on his Instagram account.

As his career in painting was so promising and bright, he started getting a blurry vision as he was growing up. After he went to an eye checkup, he was diagnosed with keratoconus. According to allaboutvision.com, Keratoconus is a progressive eye disease in which the normally round cornea thins and begins to bulge into a cone-like shape. This cone shape deflects light as it enters the eye on its way to the light-sensitive retina, causing distorted vision.

As a painter, isn’t it the worst that could happen to you? His dreams and aspirations were shattered. Even though his eyesight was poor, he didn’t lose his hope and kept on the painting which was more better than before. One day he found out that, a doctor had invented a procedure to treat this disease, but, it cost a lot which he couldn’t offer. But, Catherine and Austin were generous enough to pay for the cost of the treatment. The emotional video is embedded down below.

Wow..a 100k..from this life changing day of treating my keratoconus.. I can't believe it's going to be 4 months since then.. The surgery helped a lot, but @drbrian_keratoconus_expert said that in my case I would need special contacts for EVEN more improvement and that's when I'll be able to see the HUGE difference!!!! Can't wait!!! One more week!!! OMG!!!!!!!! I'm so full of emotions right now.. I can't wait to start what's coming!!!!!! I LOVE ALL YOU GUYS!!!!!?❤️✨ Thank you from the bottom of my heart, truly..? Video credits goes to @theacefamaly ?

As a popular YouTuber and Painter, isn’t it obvious that his fans would want to know about his romantic life. Luckily, his romantic life is just as amazing as his career is. He is in a relationship with Leslie Rose. It all started when he moved to Florida. Ryan introduced her in his channel as one of his best friends. However, the way they looked at each other made his fans suspect that they are in a relationship. He stayed quiet about what people had to say.

On the negative note, people also started judging Leslie that she was one of the reasons why he and Amanda broke up. Amanda and Ryan were basically in a relationship for a short period of time. They broke up after they couldn’t handle their long-distance relationship. As soon as he drops his break up video, Leslie starts to appears on his videos. It brought lots of negative as well positive comments on her.

Love is the fuel ?❤️? Watch full video on YouTube! Link in my description✨ [email protected] ?

Ryan couldn’t tolerate the negativity and posted a video saying that they were in a relationship. Also, he asked his supporters to not judge her and pass mean comments on her. He also said that as long as they are together, those negative comments mean nothing. And guess what? His fans started loving them as a cute and perfect couple. Their relationship has been so amazing as he has poured all the love and surprises to her.

Recently, they found out that they are going to be parents. They were so happy and grateful that they were about to be father and mother. It was not long that they shared their happiness with their fans. Watch the video embedded below.

So is the case for Ryan, as most of his earnings and incomes come from YouTube. The subscribers and viewers count of his has risen significantly over the years.

Currently, he has more than 1.2 million subscribers on his channel with an average of 226,093 views daily.

Net Worth: According to socialblade.com, from his YouTube channel, he earns an estimated $9.1k – $145k in a year calculating the daily views and growth of subscribers.

Thus, evaluating all his income streams, explained above, over the years, and calculating it, Ryan Paiz’s estimated net worth is $500,000-$600,000.

Father:  He has not mentioned anything about his father till now. But, Catherine has introduced their father on her YouTube video. As per the video, he lives in Spain at the moment and frequently visits them often.

Mother: Ryan and Catherine are very close to her mother.

Sister: He spent his childhood alongside her loving sister Catherine Paiz. They had a really close bond since their childhood till now. They have been each other’s support from the very beginning of their life.

Childhood: Ryan really had an awesome childhood filled with the love of his family. Despite his parents divorced when they were young, he was always given love from his family. His parents provided everything they could so that he could be a talented and charming person that he is today.

Education: He has not revealed about where and what he studied in his life. Regardless, given his status as a brilliant painter, he is well educated and qualified.

Ryan Paiz is a brilliant painter. He had lots of potential and god gifted talent in art. However, his dream shattered into pieces when his eye-sight started degrading day by day(keratoconus) till the point he couldn’t see clearly (mentioned above).

After the surgery, his vision came back gradually. Then, he started his career as a YouTuber. At the moment, he has shifted to Florida with his mom to pursue what he wants.  He was unsure about what his primary goals but, he decided to pursue a career in both painting and YouTube. Through his new found popularity, he could sell his amazing portrait and paintings. It gave him an opportunity to do both the things he is really passionate about.