Christie Lowon’s passion for squishy led to the creation of the channel, SoooKawaii. She made a lot of videos playing with a bunch of squishes and earned her a lot of fame in the process. After taking a long gap from YouTube, she is back again explaining why she took the gap. Now keep reading to know the reasons and to know more about her. 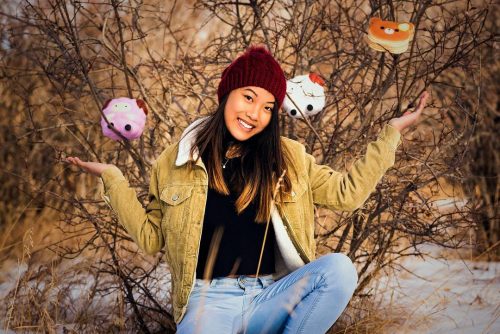 SoooKawaii was born on June 14, 2003, in Canada. Ever since Christie was a kid, she was always keen and passionate about playing with squishy, gymnastics, and photography. As she grew up, she earned a lot of fame for her vlogs, challenges, squishy related videos and other random videos here and there which she uploads in her channel, SoooKawaii.

Right now, Christie has earned more than 715k subscribers. Not just that, her channel has attained a total of more than 105 million views from her videos. Other than YouTube, she has lots of fan followings on her various social media platforms. Also, she has more than 92k  followers on her Instagram alone at the time of writing this article.

Why she took eight months to be back on YouTube?

At the moment, she mostly sells custom-made squishy toys with various stickers and prints. The prices of the merchandise range from $2 – $50 which is very affordable and gets ‘sold out’ time and again.

So is the case for SoooKawaii, as most of her earnings and incomes come from YouTube. The subscribers and viewers count of her has risen significantly over the years.

Currently, she has more than 715k   https://www.youtube.com/channel/UCnM4K_klCJZKDZP1HpSeFUA/about subscribers on her channel with an average of 17,793 views daily.

Net Worth: According to socialblade.com, from her YouTube channel, she earns an estimated $1.6K – $25.6K in a year calculating the daily views and growth of subscribers. Thus, evaluating all her income streams, explained above, over the years, and calculating it, SoooKawaii’s net worth is estimated to be around anywhere between,$100k – $150k.

SoooKawaii started her YouTube channel on April 18, 2014, and uploaded her first video titled “SQUISHY PET PEEVES!.” Since then she has been uploading various vlogs, challenges, squishy related videos and other random videos here and there.

Till now, out of all her videos, “EXTREME SQUISHY DARES?! Yes, I Cut My $30 Squishy…” is the most popular videos in her channel. It has racked more than 11 million views as of now.

At the moment, her channel is growing day-by-day with over about 715k following her video content. Also, she is inconsistent in uploading videos as she uploads videos as she took a long eight-month gap from YouTube. a week.