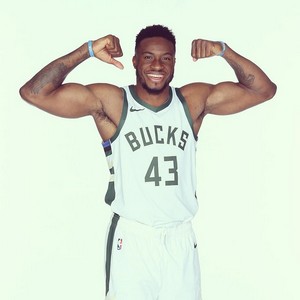 Thanasis is a very talented Greek basketball player best known for playing with MoraBanc Andorra of the Liga ACB. Thanasis is currently playing in the NBA for the Milwaukee Bucks alongside his brother Giannis Antetokounmpo.


In this article, we have gathered all the information there is to know about Thanasis. We have covered Thanasis’s birthdate, family, education, romantic life, and net worth. So, stick to the end.

Thanasis Antetokounmpo was born on July 18, 1992, in Athens, Greece. Thanasis is of Nigerian descent. No wonder where Thanasis gets his athletic spirit as Thanasis comes from a family full of athletes. Thanasis was born to Charles and Veronica Antetokounmpo. His father Charles was a former Nigerian soccer player. His father passed away in September of 2017. His mother Veronica was also an athlete. She was a former high-jumper. His brother Giannis, Kostas, and Alex are also basketball players.

His brother Giannis plays in the NBA for Milwaukee Bucks. He won the  MVP  award and NBA Defensive player award in 2019 and 2020. He is one of the few players to win both of the awards in the same season.

Kostas is currently playing for the Los Angeles Lakers and He is the only Greek-born player ever to win an NBA championship.

Alex is playing in the Spanish Liga ACB for UCAM Murcia at the moment. He started his career playing for the club’s reserve team in the Liga EBA.

Ever since Thanasis was a kid, he was passionate about basketball. As a kid, Thanasis struggled because of poverty. He was born in the capital of the country but being the children of Nigerian immigrants, they were never officially recognized as Greek Citizens because of which his parents struggle to find work. He and his brother Giannis contributed to the family’s meager income by selling bags and sunglasses on the city’s streets.

He has not given any insight into his educational journey till now.

Thanasis is one of the most popular and talented basketball players who has been able to gain a humungous fan base. Being such a famous personality it is pretty much sure that many of his fans would have the interest to know about his current relationship status.

Talking about his current relationship status he has not revealed anything. Thanasis has been quiet about his romantic on social media sites and the internet. He has not provided any sort of information or any hints about him dating someone or being in a relationship. He seems single for the current moment and is focused on building his career and name in basketball.

Thanasis started his career in basketball playing with the senior men’s team of Filathlitikos. He began his professional career with Filathlitikos, of the Greek third division in 2012.  He was selected by coaches to play as a special participant in the 2013 Greek All-Star Game. He also competed in the slam dunk contest. After originally declaring for the 2013 NBA draft, he withdrew from the draft on June 17, 2013, along with 17 other players, on the day of the withdrawal deadline. He had originally entered the draft with his younger brother Giannis.

On November 1, 2013, in the 2013 NBA Development League Draft, Thanasis was selected by the Delaware 87ers with the ninth overall pick. He debuted in D-League playing against Canton Charge on November 23, 2013. Thanasis was named to the 2014 NBA D-League All-Defensive third team on May 1, 2014.

On June 26, 2014, Thanasis was selected with the 51st overall pick in the 2014 NBA draft by the New York Knicks. He later joined the Knicks for the 2014 NBA Summer League. He was acquired by the Westchester Knicks on November 3, 2014. Thanasis made his NBA debut with New York Knicks and played against the Phoenix Suns.

Thanasis signed with MoraBanc of the Liga ACB. Thanasis played an instrumental role as his team qualified for the first time in 22 years to the ACB playoffs. Thanais was awarded The Spanish basketball magazine Gigantes del Basket’s 2017 “Top 5 Trophy”, which goes to the Liga ACB “Most Spectacular Player of the Year”.

Thanasis came back to Greece and signed two-year deal with the EuroLeague giants Panathinaikos, of Greece’s top-tier level Greek Basket League. He won the MVP award in the 2018 Greek All-Star Game. He won the Greek League championship with Panathinaikos and he was named Greek League’s Most Spectacular Player, of the 2017–18 season.

Thanasis signed with the Milwaukee Bucks on July 16, 2019, where he got reunited with his brother Giannis, and also became the second pair of brothers on the Bucks roster, after Brook and Robin Lope.

Thanasis Antetokounmpo stands at the height of 6 feet and 5 inches. 99 kg Thanasis looks very attractive with beautiful Dark Brown eyes and Dark Brown hair. Also, he has an Athletic and Shredded body physique. The details regarding his body measurements remain unknown.

Basketball Player: Thanasis has not mentioned his income or earnings until now however, according to cnbc.com, the average salary of a basketball player in the NBA is estimated to be around $7.7 million.

Sponsorship: As he has more than 780k followers on his Instagram account, advertisers pay a certain amount for the post they make. Considering his latest 15 posts, the average engagement rate of followers on each of his posts is 4.09%. Thus, the average estimate of the amount he charges for sponsorship is between $2,303.25 – $3,838.75.

Thus, calculating Thanasis’s income streams, which we mentioned above, over the years, Thanasis Antetokounmpo estimated net worth is $5,000,000 – $6,000,000.

Q: What is Thanasis Antetokounmpo’s birthdate?

Q: What is Thanasis Antetokounmpo’s age?

A: Thanasis Antetokounmpo is 28 years old.

Q: What is Thanasis Antetokounmpo’s height?

A: Thanasis Antetokounmpo’s height is 6 feet and 5 inches.

Q: Who is Thanasis Antetokounmpo’s Girlfriend?

A: Thanasis Antetokounmpo is Single at the moment.

Q: What is Thanasis Antetokounmpo’s Net Worth?