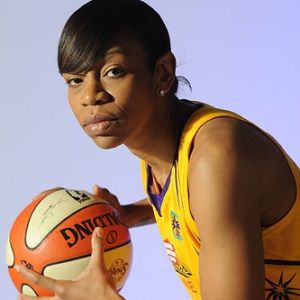 In this article, we have covered:

Tina Thompson is a retired professional basketball player as well as the current head coach of the Virginia Cavaliers women’s basketball team. She is the first women to drafted in WNBA history. She helped the Houston Comets to four WNBA championships. Moreover, she won two Olympic gold medals. As a result of her astounding career, she is the WNBA’s all-time leading scorer.

• Father: She has not disclosed her father’s identity till now.
• Mother: She has not disclosed her mother’s identity till now.
• Siblings: She has a brother named TJ.
• Childhood: She learned basketball with her brother at Robertson Park located in West Los Angeles, California.
• Education: She attended Morningside High School located in Inglewood, California where she secured 1,500 points and 1,000 rebounds. After that, she enrolled in University of Southern California and graduated in 1997.

Tina Thompson grabbed the attention of many because of her outstanding statistics in her high school. It didn’t become a surprise as she was selected to represent the USA at the 1995 World University Games held in Japan. They were able to secure the silver medal in the competition after being defeated by Italian side.

After that, she was invited to become a member of the Jones Cup team which represented the USA in 1996. They were able to secure the gold medal in the competition by defeating Slovakia. She maintained an average of 9.6 points per game and 6.2 rebounds.

At the 2006 World Championships, she was selected to play for the USA National team. They were able to secure the bronze medal in the competition. Similarly, Thompson played for the Team USA who secured the Olympic gold medal in the 2004 and 2008 Summer Olympics.

Thompson became the first draft pick in the history of WNBA in the inaugural WNBA draft by the Houston Comets in 1997. She lead the team to back-to-back WNBA championships from 1997–2000. In 2005 season, she was not able to perform well because of her pregnancy. However, that didn’t stop her to reach to get back to her brilliant best in 2006 season as she averaged 18.7ppg. In 2011 season, she became a free agent and signed with the  Seattle Storm on February 27, 2012. In the May of next year, she announced her retirement from the WNBA.

Thompson was named to the  2018 class of inductees for the Naismith Memorial Basketball Hall of Fame on March 31, 2018.

She was associated as the head coach and assistant head coach for the Lady Longhorns for three seasons. Currently, she is serving as the head coach of the  Virginia Cavaliers women’s basketball program after her appointment on April 16, 2018.

NET WORTH AND SALARY

At the moment, there are lots of information on different websites. However, it can’t be taken into consideration due to poor referencing. Thus, her net worth is yet to be known. Also, there is no information about her career earnings.